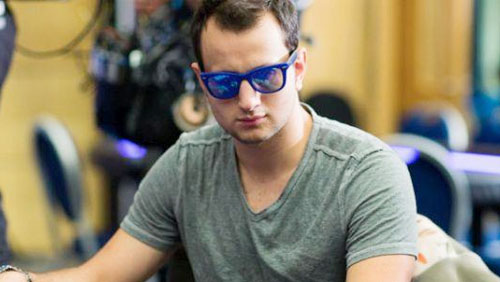 The German Global Poker Index Player of the Year, Rainer Kempe, has won another poker tournament, this time taking down the AUD 25,000 Challenge at the Aussie Millions for more than half a million dollars.

James Victore said, “our search for security and comfort is our ruination because it makes us settle on things we don’t want, and at some point, it will break our spirit.”

Ok, no more security and comfort.

To remain one with spirit, we should evolve daily, grow incrementally, tournament by tournament, table by table, hand by hand. All of which makes the sight of Rainer Kempe winning trophy after trophy so challenging as it begins to feel like nothing changes.

The 2018 Global Poker Index (GPI) German Player of the Year (PoY) has taken down another title beneath the crane-like booms and cameras on a swivel.

The AUD 25,000 Challenge pulled in a meaty looking 151-entrants, and this is how the final table went down.

The Final Table Action in a Nutshell

The first to book an appointment with a hypnotist to cure his self-loathing at being eliminated from poker tournaments was Jack Salter. Salter moved all-in from the button holding 87dd, and Marsh called in the big blind, holding Ad3c, and ace-high held.

Marsh would follow Salter out of the competition like a dog belonging to Pavlov follows a man holding a revolver and a bell. With blinds at 15k/30k, Marsh opened with a raise from the hijack holding KhTc, Chino Rheem three-bet to 175,000 on the button holding pocket treys, Marsh four-bet to 363,000, and Rheem made the call. The flop was perfect for Rheem – 5d4c2c – Marsh moved all-in, and Rheem, who was at risk, made the call. The Qs and 7c finished the action, Rheem doubled into the chip lead, and Marsh fell to the bottom of the chip counts. In the next hand, Marsh moved all-in for 55,000, holding KJo, and Kempe called and won holding A6hh.

Gautam Dhingra left the competition in fifth place after losing a flip with AK against the pocket jacks of Guillaume Nolet. The QdJsTd flop gave Dhingra the nut straight, but Nolet still had outs holding a set, and a backdoor flush draw. The 7d on the turn, improved Nolet’s odds, and the 8d on the river handed Nolet the flush, and a bamboozled looking Dhingra headed to the cash desk.

Nolet may have been the chip leader with four remaining, but there wasn’t much between the four players, as was proven when Nolet became the next player to leave the competition.

The Canadian opened to 90,000 from under the gun, Rheem three-bet to 325,000, Nolet moved all-in for 965,000, and Rheem made the call. Rheem turned over AhTs, and Nolet showed pocket nines for the best hand until two more aces showed up on the flop and the turn to give Rheem the chip lead with three remaining.

The pattern of drowning someone before walking the plank continued when Kempe removed Rheem from the equation. Rheem opened to 175,000, Kempe three-bet to 460,000, Rheem moved all-in for 1,900,000, and Kempe made the call. It was another flip, this time with Rheem holding the pocket nines, and Kempe searching for salvation with AQo, and he flopped an ace, and turned a queen, to set up a heads-up contest with Lewis holding a slight chip lead: 4,240,000 v 3,260,000. Given it was 4 am, the rail was delighted when the pair agreed upon an ICM deal and flipped for the trophy, which Kempe won when his K4dd beat the J9o of Lewis.

Kempe has now won $18.5m playing live tournaments, and this was his 14th live tournament victory. Toby Lewis won the Aussie Millions Main Event, last year, and Chino Rheem came into this one on the back of winning the PCA Main Event.