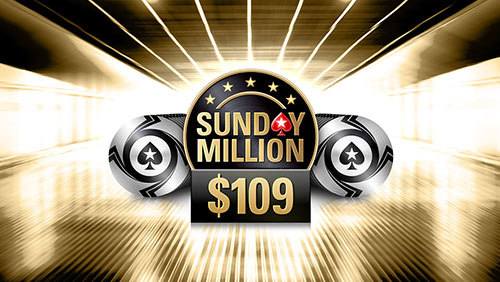 PokerStars has reduced the $215 buy-in Sunday Million to $109 in a bid to attract more players, and Parker “tonkaaaa” Talbot chops the final $215 buy-in event for the most significant score of his career.

Back in 2006, when PokerStars created their flagship $215 buy-in, $1m guaranteed Sunday Million tournament the poker landscape was very different. The $215 price point was at the high end of poker tournaments, especially a weekly event, but today, with the PokerStars High Roller Club offering buy-ins of $530, $1,050 and $2,100, that ground is adequately covered.

With that in mind, beginning Sunday 27 January, PokerStars is reducing the buy-in to $109, while at the same time maintaining the things that make the Sunday Million THE best tournament of the week.

12-minute levels for the first ten levels, switching to 15-mins after that – check.

“The plan is simple,” writes Stephen Bartley on the PokerStars blog, “We want to open online poker’s flagship event to more and more players.”

The change in price point allows the working class to join the middle class and pro grinders in the one event guaranteed to change your life on a weekly basis should the Poker Gods feel you deserve it.

PokerStars officials will keep a beady eye on the virginal $109 buy-in tournament, and will tweak the structure should they see a disparity of average stack size on the final table, or a need to play extra hours to take down the event.

The last-ever Sunday Million pitched at the $215 price point saw Parker “tonkaaaa” Talbot finish 2/5837 after cutting a heads-up deal with the UK’s PokerDave476.

Talbot booked $124,114.98 after losing his heads-up battle, despite opening up a 2:1 chip lead at one point, for the most significant online score of his career. The win came a month after Talbot secured his personal best live score, finishing 6/893 at the PokerStars European Poker Tour (EPT) Prague for €179,360 in December.

Ironically, more than 9,000 people saw Talbot’s deep run on Twitch, providing PokerStars with some free advertisement from the 888Poker ambassador. Talbot has won $4,242,090 playing online tournaments. He rose to #11 in the world in 2016.

PokerDave476 is no stranger to the big money finishes after coming runner-up to daBuStar in a $22 NLHE Phase 2 Spring Championship of Online Poker (SCOOP) event in 2018 netting a $122,801,88 payday. There were 4,423 entrants in that one.

On the PokerStars High Roller scene, Dario “Secret_M0d3” Sammartino won the $2,100 PokerStars Sunday High Roller, beating 121-entrants to bank the $48,431 top prize. The Italian beat the likes of Liv Boeree (4th), Mikita Badziakouski (5th), Talal Shakerchi (6th), Patrick Leonard (7th) and Nick Petrangelo (8th) in that one. Last month, the heartthrob won both the $530 Sunday 500 and the $1,050 Sunday Supersonic in a single day.