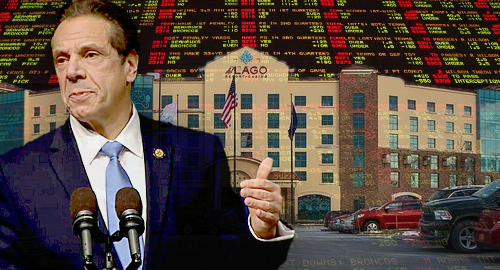 On Tuesday, Cuomo delivered his 2019 State of the State Address, during which he claimed sports betting was “here and it’s a reality” following last spring’s US Supreme Court ruling that overthrew the federal betting prohibition. The question now facing the state is who will be permitted to offer betting in New York State.

The 2013 legislation that authorized construction of four new upstate commercial casinos allowed those casinos to offer sports betting pending a change in federal law. Those casinos have all inked prospective deals with betting operators and are positively gagging to welcome a new revenue stream.

Cuomo’s betting ambitions are short on specifics but the governor said he wants to “authorize sports betting in the upstate casinos” because “it will help generate activity” at those venues, which have so far failed to deliver on their original gaming revenue projections.

However, the state’s tribal casino operators – with whom Cuomo has repeatedly sparred – would also be eligible to offer wagering, as the terms of their tribal compacts allow them to maintain product parity with the commercial casinos. The tribes have been busy striking their own betting deals, just in case.

Cuomo apparently sees no opportunity for the state’s off-track betting operators to add sports wagering to their current racing product. The governor also reportedly believes there’s no way to launch online or mobile wagering without modifying the state’s constitution, which would require a voter referendum. An attempt to pass new betting legislation came up short during last year’s political session.

The New York Gaming Commission has for some time now been tasked with developing betting regulations, although little tangible signs of progress have emerged. It remains to be seen if the regulator believes it has the authority to approve digital wagering under the 2013 casino legislation, which made no reference to either online or mobile betting.