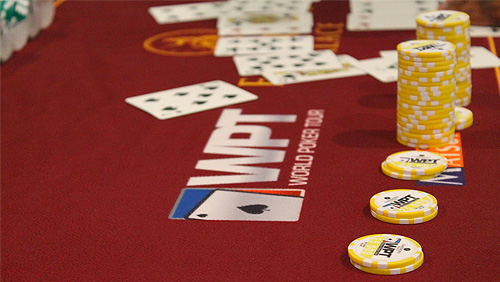 Two stories with a North American live poker feel to them including the World Poker Tour taking their circus to The Venetian and the Bay 101 Shooting Stars event returning minus the WPT seal of approval.

My mother got a new hip this morning.

She was on the NHS waiting list for 18-months.

I won’t keep you that long.

The WPT Announce a Partnership With The Venetian

The World Poker Tour (WPT) has agreed to partner with the man hellbent on shoving online poker down the stairs carpeted in the red, white and blue.

The new deal means there are now three Vegas tour stops in the Season XVII schedule – the WPT Five Diamond World Poker Classic at Bellagio, and the WPT ARIA Summer Championships the other two. The Baccarat Crystal WPT Tournament of Champions is also a Vegas event.

With the WPT vowing to move as many final tables to the HyperX Esports Arena in the Luxor as possible the new partnership makes sense, although the chose of partner is less than desirable.

PocketFives scribe, Jeff Walsh, has revealed that the famous Bay 101 Shooting Stars event will return to the 2019 poker calendar, but not as part of the WPT Season XVII schedule.

After running consecutively from Season II to Season XV, the WPT decided to drop the event from the Season XVI schedule like a lazy slave on the top of an Egyptian pyramid.

Since the decision, the Bay 101 floor staff and dealers have been harassed by the San Jose locals for the event to return, and Bay 101 Tournament Director, Matt Savage, has agreed to bring it back without the official stamp of the WPT.

The event will carry a $5,200 buy-in, and there will be 30 Shooting Stars each carrying a $2,000 bounty. There will be a single starting flight, 40, 60 and 90-minute levels, and play reduces to six-handed action when the headcount trims down to 36 players.

The venue is putting on 26 satellites with seats available for the event.

“We are hoping to give away around 200-seats,” the Bay 101 Tournament Director, Quoc Pham told PocketFives.

“I can tell you that this years list of stars will look entirely different than years past,” Said Savage.

According to the piece, both Savage and Pham still harbour hopes of rejoining to the hip of the WPT.

Until then, let’s see how they manage without them.

If you have $450K laying around, the Venetian can offer you the world
Erik Gibbs
21 March 2019

Get Out of the Venetian! The Poker World Direct Anger at the TDA
Lee Davy
30 March 2015
.