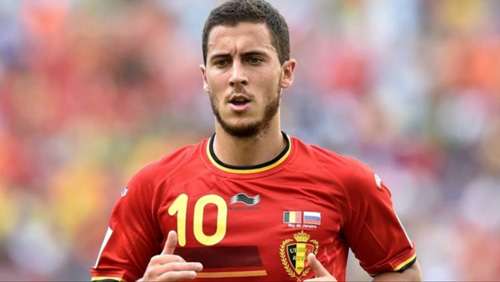 Eden Hazard has helped raise €50,000 for the One Drop Foundation after the completion of the Hazard Poker Series on bwin, and reports suggest that the Chelsea star has agreed upon terms to move to Real Madrid in the summer.

What did you want to be when you grew up?

Eden Hazard wanted to be a professional footballer, winning the World Cup with Belgium, and the Champions League with Real Madrid.

It looks like two of those dreams will come true.

According to reports billowing out of the speakers connected to the Spanish radio show Onda Madrid, the 27-year-old has agreed upon terms to join the Champions League title holders in the summer.

Hazard’s current Chelsea contract ends in 2020, and despite Roman Abramovich willing to offer him a stick of gum, a missile range and a brand new planet, the brilliant Belgian still won’t put pen to paper.

It’s no secret that Hazard longs to play for Los Blanco. In an interview with the media a few months back, Hazard said: “Real Madrid is the best club in the world. I don’t want to lie today. It is my dream since I was a kid. I was dreaming about this club.”

Hazard began the season like lightning, scoring seven goals, and putting in performances that had the pundits talking about him being the best player in Europe, if not the world. But a back injury has quietened that talk, and Chelsea has stuttered in the meanwhile, losing back-to-back away games in the Premier League.

La Liga is that bad; Champions League football is a guarantee.

Rumour has it that Chelsea won’t let him go unless Madrid fork out €170 million. With Hazard declaring his love for the club, and a contract that’s currently looking as worthless as a cattle ranch without cattle, it’s doubtful Chelsea will get their dough. A likelier scenario is a big money transfer with Mateo Kovacic thrown into the deal like a peanut shell in an ashtray. Kovacic is currently on loan at Stamford Bridge, and sources say he doesn’t want to go back to Spain and gather haemorrhoids.

Betfair has made Hazard a 4/6 shot to join the Spanish giants.

The Hazard Poker Series Raises €50,000 For One Drop

GVC Holding‘s bwin brand and Eden Hazard have raised €50,000 for the One Drop Foundation.

It was August when the trio announced The Hazard Poker Series, giving bwin players the opportunity to compete in a series of freerolls with nine lucky winners getting to face Hazard in a live Sit n Go at the MILLIONS UK in Dusk till Dawn (DTD).

Bwin promised to donate money to Guy Laliberte’s charity depending on how many entrants took part in the Hazard Challenge with a guaranteed €50,000 heading into the coffers, with a stretch target of €200,000.

I guess they didn’t hit the stretch.

“I was excited to be involved in the Hazard Series with bwin. I love poker and the unique mental challenges it poses. More importantly, it’s great that through the Hazard Series, bwin has supported such a vital charity as One Drop,” Hazard stated in the press release.

The One Drop Foundation website shows that 851-children have died, today, as a result of water-related illnesses.

Another one has just died.

I wonder what his or her parents wanted them to be when they grew up?