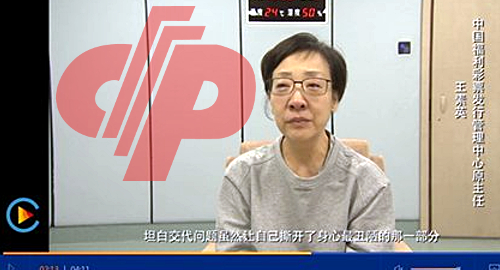 China’s government is attempting to downplay social media rumors that lottery administrators have embezzled nearly $20b from lottery proceeds.

On Tuesday, the South China Morning Post reported on the frantic efforts by Beijing authorities to refute social media chatter that around RMB136b (US$19.5b) had been embezzled by corrupt lottery administrators. A popular meme blames this corruption for the inability of the average citizen to win a sizable lottery prize.

The meme has its origins in a video recently broadcast on state television in which four former high-ranking welfare lottery officials confessed to “systematic corruption in the lottery field.” The officials included Wang Suying (pictured), former director of the China Welfare Lottery Issuance Management Center, who was accused of “serious violations of Party discipline” in September.

Online outrage over the corruption quickly grew, with netizens convinced that the rot isn’t limited to a few top officials. This view was echoed by a Ministry of Civil Affairs official, who wryly commented that “if only several fish die in a river, it’s probably the fish’s problem, but if all the fish die in this river, it must be caused by the water.”

In an effort to lower the social media temperature, Beijing rejected the online estimates of how much of the RMB427b in lottery sales recorded last year had vanished into officials’ pockets. But the government’s claims that it would be “inconvenient” to reveal the actual amount that was pilfered led to suggestions that the stolen sum may be higher than RMB136b.

In 2015, China’s National Audit Office reported that corrupt lottery officials had stolen or misused nearly RMB17b between January 2012 and October 2014. Since part of the theft involved administrators not reporting all online sales, Beijing responded by imposing a ‘temporary’ suspension of online sales in March 2015 that continues to this day.

The corruption probes are spoiling what was otherwise shaping up to be a banner year for China’s lotteries, which are on track to set yet another annual sales record. The year also saw sports lottery sales overtake the traditionally dominant welfare lottery for the first time.