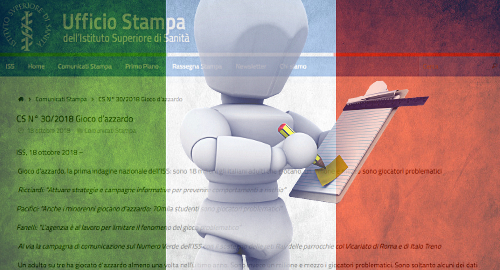 Italy’s gambling advertising ban isn’t likely to reduce the nation’s number of problem gamblers, at least, if the findings of a new gambling participation survey are any indication.

On Thursday, Italy’s Istituto Superiore della Sanità (ISS) health agency released the results of a survey commissioned by Italy’s gambling regulator AAMS into the scope of the nation’s gambling activity. The survey queried over 12k adults, making it the largest such study ever conducted in the country.

Mirroring studies in other countries, ISS found that Italy’s problem gamblers were more likely to abuse alcohol, tobacco and other drugs, making it more accurate to describe these individuals who have difficulty resisting temptation in all its forms, as well as assessing and adapting to risky situations.

Italy’s new government recently announced plans for a blanket prohibition on gambling advertising and sponsorships, ostensibly out of a desire to limit the further spread of problem gambling activity. This ban is currently the subject of a number of legal challenges, including multiple petitions filed in European Union courts by mobile casino operator LeoVegas,

But the ISS survey suggests this ban will likely fail to achieve its stated goals. The survey found that only 19.3% of Italians who actively gambled last year said they were inspired to play after seeing a gambling advert, while the other 80.7% said advertising had no effect whatsoever on their willingness to gamble.

Moreno Marasco, president of Italian gaming operator association Logico, issued a statement saying the ISS survey “shows that online [gambling] is an almost insignificant slice of the problems” facing Italy’s gamblers. Marasco added that “it would make sense” to use the survey’s findings re the ineffectiveness of gambling advertising in formulating the country’s gambling policies.