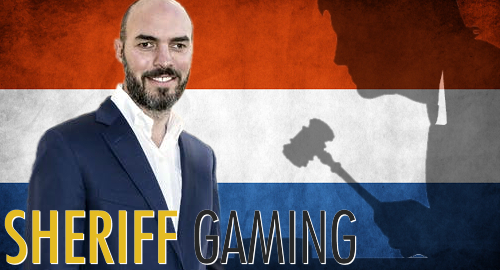 The former CEO of defunct slots developer Sheriff Gaming could be facing four years in a Dutch jail cell if convicted on charges of illegal gambling, money laundering and tax evasion.

On Thursday, Stijn Flapper, Maurice Gregoire and Michel Gregoire appeared in a Den Bosch court, where prosecutors demanded prison sentences of four years for Flapper, while brothers Michel and Maurice are potentially looking at 36 and 30 months, respectively, for their roles in the now defunct Sheriff Gaming and its parent company Bubble Group NV.

The trial, which began in mid-September, stems from a series of raids in 2013, in which Dutch prosecutors, gaming and tax officials seized dozens of bank accounts, residential and business properties across four countries. The assets were said to be part of over €100m in proceeds from an illegal online gambling operation led by the three accused.

Flapper (pictured) has denied the substance of the allegations against himself and the Gregoire brothers, and filed a €75m lawsuit against the Netherlands government last year, arguing that he’d “done nothing illegal.”

Prosecutors have accused Flapper and his partners of using a network of seven Costa Rica-based gambling sites to launder money from other illegal activities, including drug trafficking. Flapper has vehemently denied any drug connection, arguing that no drugs were found on the arrested individuals.

The Gelderlander media outlet quoted Public Prosecutor Michiel van Ijzendoorn saying that the three accused men had “earned huge sums of money with prohibited activities with which they could afford a very prosperous lifestyle.”

The prosecutor singled out Flapper as having reaped the most money from these activities, while claiming that the online gambling exec would have been better off directing his “relentless energy” towards other, more legal activities.

The three principals have also been hit with a €13.6m back-tax demand and some of the seized real estate assets were sold off last year to pay this tab. Prosecutors have initiated confiscation proceedings against the three suspects, plus Flapper’s wife and mother and other figures connected to the alleged criminality.

One of the more disturbing allegations to emerge from the lengthy criminal proceedings was the testimony of a Sheriff Gaming software engineer who claimed the company’s slots products were designed not to pay out large jackpots, while jackpots that were hit went to “family and friends” of the three principals.

In 2014, Flapper’s brother attempted to revive the Bubble Group operations under a new brand, Blue Gem Gaming, but Dutch authorities nipped this plan in the bud. The Bubble Group assets were eventually sold to Austria’s Novomatic Group.

In addition to the three principals, 15 other defendants — including the trio’s lawyer and accountant — are facing a variety of charges for their roles in the alleged crimes. The defendants’ attorneys will commence their arguments next week. If all goes according to plan, the court hopes to render its verdict on December 20, meaning it’s either going to be the best or worst Christmas ever for the defendants.