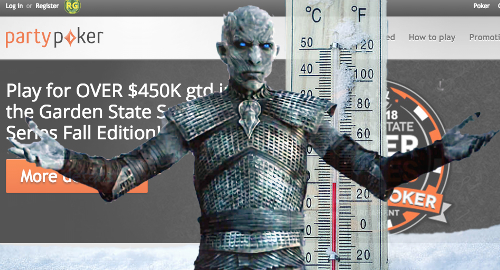 New Jersey’s online gambling operators came within a whisker of their all-time monthly revenue record in September, despite poker sinking to a new record low.

Figures released Friday by the New Jersey Division of Gaming Enforcement (DGE) show the state’s online gambling licensees generated combined revenue of $25.75m in September, nearly $1m more than they earned in August and only $150k off their all-time peak set this July.

If you’ve been following this story for any length of time, you’ll already know that the online casino vertical did all the work in September, posting a 30.6% year-on-year revenue gain to just over $24.1m.

In equally predictable fashion, the online poker vertical stunk out the joint, falling 15% year-on-year to $1.6m, a new record low for the market, well below the previous low-water mark of $1.73m in June 2017.

The poker tumble came despite this spring’s launch of interstate shared liquidity with Delaware and Nevada, which has provided a moderate boost to the few sites eligible to participate, while doing absolutely nothing to grow the market as a whole.

The perennially market-leading Golden Nugget online casino had another near-record month, reporting revenue of $9.28m, tantalizingly close to its all-time best of $9.33m set this July. The Borgata was a distant runner-up with a combined total of $4.56m, of which $400k came via poker.

Caesars Interactive Entertainment New Jersey placed third with $4.16m, of which $671k came via poker (sites operating under the CIENJ umbrella are currently the only ones enjoying the shared liquidity benefit).

Resorts Digital Gaming, whose operations include The Stars Group’s PokerStars brand, ranked fourth with $3.43m, of which nearly $539k came via poker. The Tropicana’s casino-only site wasn’t far back with $3.34m.