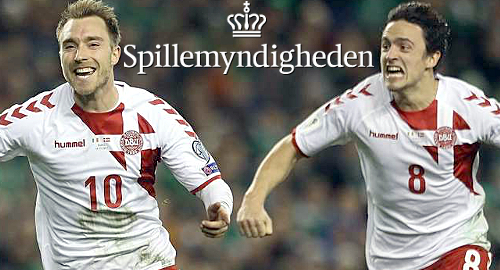 Denmark’s regulated gambling market got a double-digit boost from betting on the 2018 FIFA World Cup in the second quarter of 2018.

Figures released Wednesday by the Spillemyndigheden regulatory agency show Danish-licensed gambling operators generated revenue of DKK1.63b (US$248m) in the three months ending June 30, an 11.5% improvement over the same period last year and nearly 7% higher than the sum recorded in Q1 2018.

For a change, it was sports betting, not the online casino vertical, doing the market’s heavy lifting. Overall betting revenue hit DKK648m, nearly one-quarter higher year-on-year, due to both excitement over the World Cup and the addition this January of animal-based races to Danish betting licensees’ list of acceptable wagering options.

Mobile also dominated betting turnover with a 54.5% share, with the remainder nearly split between land-based (22.9%) and desktop (22.7%). However, land-based channels still account for a plurality (44.4%) of individual betting transactions.

Looking at the whole World Cup wagering experience, including the portion in July that falls outside the Q2 parameters, betting turnover with Danish-licensed operators surged 72.5% from the 2014 tournament (for which Denmark’s national team failed to qualify). This year’s World Cup wagers were also 13% higher than those recorded in the 2016 European championship.

Shifting to the online casino vertical (into which the regulator bundles online poker), revenue hit DKK537.2m in Q2, a 17.4% year-on-year improvement and 3.1% higher on a sequential basis. As ever, slots dominated the casino vertical with a 66.4% share, while roulette claimed a 15.9% slice and blackjack scored 12.3%.

Multi-player commission games, which since January 1 includes online bingo in addition to poker tournaments and cash games, generated revenue of DKK37.1m, up 12.4% year-on-year but down 9.5% sequentially.

Bingo contributed DKK12.2m to Q2’s online casino total, down from DKK15m in Q1, meaning (a) bingo boredom has already set in, and (b) online poker activity continued its largely uninterrupted multi-year freefall unabated. Online poker revenue came in just below DKK25m, around DKK3m below Q1’s take, although this Q1-to-Q2 decline has occurred every year since the market liberalized in 2012.

Unlike wagering, most online casino revenue (69.2%) is generated from the desktop. Desktop platforms accounted for 77.4% of online bingo revenue, dropping to 57.4% for roulette and 52.1% for blackjack. Slots was the only casino vertical in which mobile claimed a dominant share (50.2%).

The regulator’s ROFUS voluntary self-exclusion program for problem gamblers reported total registrations of 15,322 as of August 1, a year-on-year increase of 4,149 names. Nearly 69% of those who opted for self-exclusion chose to permanently bar themselves from gambling with Danish operators.