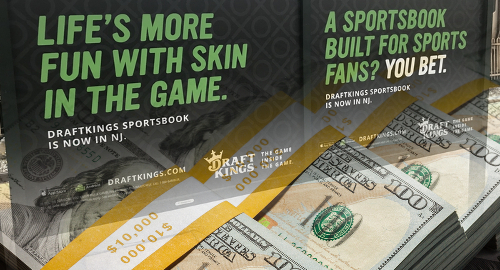 The DGE reported sports betting revenue of just under $9.2m in August, although, as previously noted, the DGE’s definition of ‘revenue’ includes wagers that are still pending, such as futures, as well as “unredeemed winning wagers” that laggard bettors haven’t got around to collecting.

The DGE says revenue from “industry completed events” since regulated betting began in late June is just over $7.2m, representing a nearly 5% hold of the market’s total handle of $146.1m.

DraftKings has partnered with Resorts Digital Gaming, the interactive arm of Atlantic City’s Resorts Casino Hotel. Tellingly, Resorts Digital claimed a near-dominant share of August’s betting ‘revenue’ at $2.97m, behind only the Meadowlands racetrack, which claimed $3.06m. However, the $98k that Resorts earned from its land-based wagering would have allowed it to claim the overall top spot.

New Jersey’s other betting racetrack, Monmouth Park, claimed the next largest slice of land-based betting revenue at just under $900k, followed by the Borgata casino ($805k + $49k online) while Ocean Resort Casino was well back at just under $520k.

September’s figures will be the ones to watch, given the arrival of a new National Football League season and the addition of multiple new digital wagering options, including Monmouth Park, which launched online last Friday.