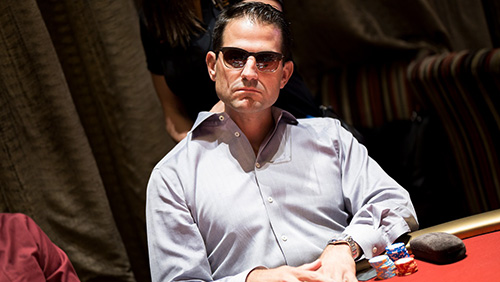 Maxence Cyrin sends a melody into my mind, racing ahead of a piano desperate to slam its teeth into the tools of her trade.

That’s how I feel.

To my left, three babies are clamped onto mother’s breasts like spiders sucking the life out of a webbed insect. A man with half a leg eats kimchi while figuring out seven across in the Independent crossword with his buddies, and an old lady with dirty looking grey hair and red nose cries.

And here I am.

In September, Adams did something similar, winning the $50,000 NLHE event at the inaugural Poker Masters, earning $819,000 – his most substantial score to date – but he wasn’t canny enough to turn that win into a Purple Jacket.

He’s determined to put that right.

Adams now leads the 2018 Poker Masters after making the final table of the first two events, finishing fourth in Event #1: $10,000 NLHE, and he will be hoping the heat follows him like a kid follows an ice cream truck.

50-entrants folded two days of their life away, and here was the final table set up at the start of the second day of action:

Let’s see how Adams conquered all.

Daniel Negreanu began the day third in chips but would exit first. Adams was the man sending Kid Poker back to his Blendtec. The pair faced an 8s7h5c flop in a single-raised pot with Adams, the aggressor, and Negreanu holding position. The killer scene was on fourth-street. The dealer placed the 3h onto the felt, and all hell broke loose. Adams bet 405,000, Negreanu moved all-in, and Adams made a quick call. Negreanu was holding tens for the overpair, but Adams was light years ahead with queens. The river card wasn’t a ten, and Adams had taken the head off one of his most dangerous opponents.

Then we lost another top, top, player.

Bill Klein limited Jason Koon‘s options to shove or fold when his pocket sixes won a race against KQo, and then a few hands later he outraced Koon’s AQo with pocket nines. Koon put the last of his beans into the bowl holding 82o against T7o of Jared Jaffee, and the best hand pre-flop held.

Klein was next to go after moving all-in holding Kjo, only for Jake Schindler to call, and win, holding A8s. And then we were heads-up after Adams took out Schindler.

Schindler left to write another list. Adams faced New York’s finest in heads-up action, and the whole affair was over before it began. Two hands in and Jaffe moved all-in holding Kc5s, and Adams called holding Ac9h.

Adams was eating chicken for dinner.