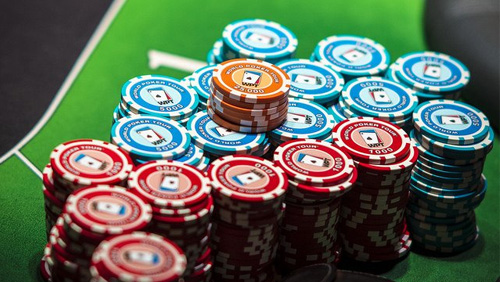 Three short poker news stories combined into one long one with Fabian Quoss exiting poker, Treasure Island shutting its poker room on the Las Vegas Strip, and the results from the WPTDeepStacks Main Event in Portugal.

A man from Spain said I shouldn’t cross my legs, not wear tight underpants, and to take off my shoes and socks and walk in the sand. So, in 15-minutes, I am going to find a children’s playgroup, and go mental in the sand pit.

I am a prime heart-attack victim.

It’s all this sitting.

They call it the ‘new cancer’.

And as I type, the water in my glass shudders like a Tyrannosaurus Rex has walked into the room looking for its dinner.

Leave the women and kids.

According to the man from Spain, I am as good as dead.

One of the hardest things about writing about poker (other than dying of a heart attack because you’re sat on your arse all day) is finding newsworthy stories. Sometimes, you have to knit a few of them together.

For some, poker is a hobby. For others, it’s a job. Some view it as a career, and you get the odd Daniel Negreanu who believes it’s his vocation.

I think Fabian Quoss has rattled around in all four of those cages, and after taking stock, realised that it had become a job. Jobs are great if you want to make some money, but not so grand when you start going all, Eckhart Tolle.

Quoss was always one of the most private men in poker, but recently he has begun sharing more of his life on Instagram, which is quite annoying because he is very good looking.

In one of his most recent posts, the man who has won close to $10m playing live tournaments spoke of his exit from poker, ostensibly pointing to the need to find higher value in life. He’s not ruling out a return to the game that gave him the freedom he now seeks to make the most of, but I doubt you’ll see much of him.

During my poker career, I never really perceived myself as a public figure, and always kept my thoughts and personal life private. So, it never occurred to me to “announce my exit“. But since I haven’t played in a while now, a lot of people messaged me asking why. I’m starting to be more active on social media these days, so I wanted to share a few thoughts. . The best description of what it’s like to be a professional high stakes poker player that I have ever read was in @jasonkoon ’s post from 12th May 2017. There are many sacrifices required when you set out to become world class at something. Dedicating your whole life to one thing inevitably consumes most of your energy, leaving no time to spend on other things. . A personality trait that I’ve observed over and over again in guys who became successful at the high stakes is the ability to go into total tunnel vision mode. Becoming so obsessed with accomplishing the chosen mission that it’s literally the only thing we spend our time on. I think this characteristic can be viewed as a skill, but also as a compulsive, unhealthy obsession. A lot of people who become masters of their craft are driven by their need to prove themselves, whether to their own egos, their peers, or to people who they think never believed in them. . The reason why I loved playing poker professionally wasn’t that I thought poker was especially interesting or rewarding of an activity (though, at times, it really can be both) but more because of the freedom it provided me. I was my own boss—traveling the world, meeting amazing people, doing something I was really passionate about. . There‘s an infinite amount of things we can choose to focus on, but for most of us, the majority of our lives revolves around a small number of things. We basically only exist in our own little bubbles, completely ignoring the infinite variety of other bubbles all around us. I think this is true for most people, but that it’s even more magnified for someone who immerses himself as deeply in an endeavour as the people described above. . [continues in comments]

The Las Vegas strip is a poker room light after Treasure Island (TI) decided to walk the plank after 12-years of swashbuckling action. The TI Poker Room was never that big, with only seven tables, and towards the end, the stakes and variety were never that high ($1-$3 NLHE cash game tables).

Back in 2012, the TI did renovate the poker room and moved it to a new location, but it seems those tables are getting in the way of profit. The closure means there are now 17 poker rooms left on the Strip.

In July 2018, poker revenue dipped 4% for the month, and this was despite the crowds clamouring all over the World Series of Poker Main Event making it the second-largest-ever.

I will bring down the axe on this unrelated combination of news stories, by telling you that Jimmy Livramento has won the WPTDeepStacks Main Event in Portugal.

It was the first live tournament score of his career.