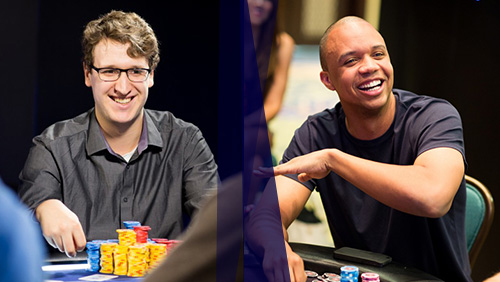 Three short stories from the world of poker that don’t merit top billing, including Max Silver sitting in a Limit-Hold’em game with $600,000 wishing he didn’t, PokerStars adding a 62nd event to the World Championships of Online Poker schedule, and another appeal from Phil Ivey.

Imagine you win a poker tournament for €600,000. You’re in a casino in a foreign country. How do you get the goods from the winning post, safely into your bank account?

Well, this is how it happened for Max Silver after the British pro took down the 327-entrant €10,300 No-Limit Hold’em High Roller at the PokerStars European Poker Tour Barcelona for €600,924.

If you win money on the European Poker Tour (EPT), you can wire it to your PokerStars account. It’s a win-win for both parties. You get your money a tad closer to home, and Stars get the opportunity to convince you to spend it all, playing online.

Silver decided to transfer the winnings from his PokerStars account to his bank account but had to wait for 48-hours.

What to do in the meantime?

One for a laugh, Silver logged on to play a few hands of Limit Hold’em and thought it would be funny to sit down with the full $600,000,

before realising he would have to cough up currency conversion costs to return the amount to euros.

Silver reached out to PokerStars to solve his problem, asking them to have ‘some mercy on this lucky fool.”

Save me @PokerStars support edition pic.twitter.com/xvxRAEB3RV

Now we know where he gets his practice.

With the PokerStars World Championship of Online Poker (WCOOP) underway, you imagine Max Silver needs all the money he can squeeze into his PokerStars account. Silver is one of the few people in the world who is likely to flick in a $25,000 buy-in event, and he’s in luck.

A nice slice of glitz at the end of a hard slog.

Day 2 of the WCOOP is in the books.

Amongst the stories so far:

Germany’s Nilsef bagged his second WCOOP title, winning a $2,100 Win the Button event for $74,459.48, eight years after winning his last. The German star, who also has a Spring Championship of Online Poker(SCOOP) title, has also made the final table of WCOOP Event #7: Omaha Hi-Lo, joining none other than Phil “MrSweets28” Galfond.

And finally, Phil Ivey is not going down without a fight in the Borgata Edge Sorting case.

You may recall that a U.S. District Court Judge ordered Ivey to pay the Borgata the $10.1m he won during those heady nights in 2012, claiming that Ivey didn’t do a good enough job of convincing the beak that he was incapable of stumping up the cash.

The appeal is on its way to the United States Court of Appeals for the Third Circuit, but that doesn’t stop Borgata from still chasing down their cash.