Doyle Brunson buys a Cadillac thanks to Bobby’s Room losers

Doyle Brunson is a man that most—if not all—poker players know, at least by name. He has been a regular fixture on the poker scene for more than half a century and is as much a part of the game as are the cards, chips and felt. The 85-year-old patriarch has more than $6 million in live tournament winnings, 10 WSOP bracelets and one WPT title. Now, he is also the owner of a brand new Cadillac Escalade, courtesy of those he took down in Bellagio’s Bobby’s Room poker room. 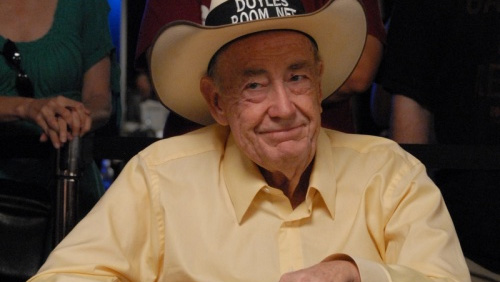 Brunson showed off his new wheels on Twitter, captioning a picture of the Escalade with, “I want to thank all the players who lost money in Bobby’s Room this summer. This new Escalade is from their generosity.”

Not everyone was impressed, however. One follower who obviously didn’t appreciate the joke, “le touche philippe,” took offense to the post and responded, “To thank people who lost money seem to me so stupid…definitively you’re a great player but for the rest.. I guess it’s your age.”

Brunson responded as only he would, saying, “Almost a 1,000 responses and yours was the only negative one. You got no sense of humor le touche.”

If Brunson wants to show off what he purchases with his winnings, there certainly isn’t any harm in it. Some people just can’t accept others’ good fortune.

Brunson is now semi-retired from poker, a move he announced this summer in order to spend more time with his wife. He isn’t completely stepping away from the felt quite yet, though, and is still seen in Bobby’s Room, the poker room known for being the home to high-stakes games and a favorite haunt for several other players like Gus Hansen and Dan Cates.

“Texas Dolly,” as he is sometimes known, has seen it all. He has played against some of the greatest names in poker, including Amarillo Slim and Sailor Roberts. He got his start playing illegal poker games in Texas before beginning to move around to play in other states such as Oklahoma and Louisiana before finally relocating to Las Vegas. He has been in almost every WSOP Main Event since 1970 and was inducted into the Poker Hall of Fame in 1988.