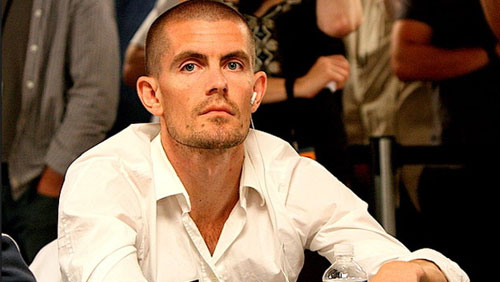 Bobby’s Room at the Bellagio in Las Vegas is known for being the home to high-stakes poker action. One particular game routinely played there, the aptly-named “The Big Game,” typically begins at $800/$1,600, although it is not uncommon to see $2,000/$4,000 mixed games. Over the weekend, things got a little out of control as players got it in during a $5,000/$10,000 four-gam

e mix. Poker pro Gus Hansen was on hand, and showed why he’s the “Great Dane” of poker.

Dan Smith let the cat out of the bag about the game when he tweeted, “There’s currently a 5-10k 4game mix at Bellagio (PLO, 2-7, Razz, O8?) and a separate 5-10k 3 game mix (2-7, PLO, dunno?) Seems like this summer has the most nosebleed action ever…. pretty wild.”  It’s unclear where he received the information from, but there was apparently some confusion as to exactly which games were being played.

Smith didn’t name names regarding who was at the table; however, the poker world knows that Hansen was present. He used his favorite social media platform, Instagram, to show a video of himself at the table with his winnings. He had accumulated a cool $1 million in chips before retiring. He said, “It is Saturday night and it’s with (a) little tears in my eyes that I leave a beautiful $5,000/$10,000 game in Bobby’s Room, but, uh, ya gotta sleep sometime.”

Later in the morning, Hansen posted an update on Instagram, saying that the game was still continuing. If he walked away with $1 million, it’s possible that someone else took down even more. After such a long game, it makes you wonder if this will become the new norm for action in Bobby’s Room.

Bobby’s Room is named for Bobby Baldwin, a poker player and casino executive. Baldwin won the 1978 WSOP Main Event at 28 years old to become the youngest person at the time to win the event. He has accumulated four WSOP bracelets—all between 1977 and 1979—and has cashed at 20 different tournaments. He went on to become an executive with several casinos, including the Golden Nugget, Mirage and Bellagio, and is currently the president and CEO of Aria Resort & Casino. Baldwin was inducted into the Poker Hall of Fame in 2003.