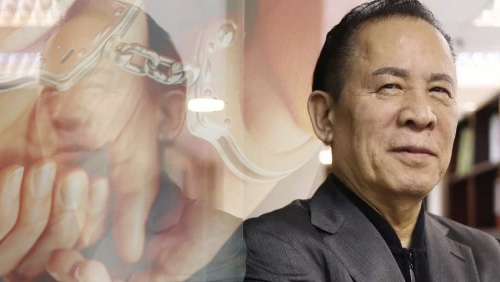 In a disclosure to the Japan Stock Exchange, UEC confirmed Okada’s arrest in Hong Kong, noting that the Japanese billionaire was later on released by the Hong Kong Independent Commission Against Corruption (ICAC) after posting bail.

The announcement did not indicate the amount that Okada paid in exchange for his temporary liberty.

“Further, Mr. Okada had duly resigned from the directorship of our Company on 29 June 2017 and he has no further connection with us whatsoever. Notwithstanding the aforesaid, we will render our full support and assistance to the ICAC and other law enforcement authorities should the situation require,” the company said in a statement.

However, Okada clarified to CalvinAyre.com that he was only invited to ICAC for questioning and not arrested, as what UEC claimed. He pointed out that there are no grounds for authorities to arrest him since he has not been charged with any crime.

“I have not been charged with any crime. ICAC’s investigation was from one of many, false allegations based on the groundless UEC’s special report. Once this ICAC investigation is completed, UEC’s illegal management and the false accusations against me will once again be exposed for the frauds I know them to be,” Okada said in a statement.

Okada’s arrest came more than a year after he was kicked out of the company he established during a boardroom coup. During its three-month investigation, UEC found Okada to have committed three “fraudulent” acts for his personal gain.

These fraudulent acts include the multi-million dollar illegal fund outflows from its Hong Kong-based subsidiary Tiger Resort Asia Ltd (TRA); the alleged illegal use of Universal Entertainment Korea Co Ltd to create a security interest for an $80-million financing deal for Okada Holdings; and the 2015 transfer of an HKD135-million (US$17.3-million) loan with no collateral and no interest to TRA.

In December, UEC lodged a HK$136.05 million (US$17.4 million) suit against its former chairman before the High Court of Hong Kong Special Administrative Region.

In a nutshell, the new suit against Okada stemmed from the loans made to Goldluck Tech Limited and the unauthorized issuance of check from TRA. UEC claimed that between February and March 2015, Okada used TRA to provide a HK$135 million (US$17.26 million) to Goldluck Tech Limited without requesting any collateral and without imposing any interest.

UEC also accused Okada of instructing TRA’s person in charge of accounting to prepare a bearer check of HK$16 million (US$2.05 million) for “his personal gain.”

Aside from the case in Hong Kong, Okada has pending lawsuits in the Philippines and in Japan.