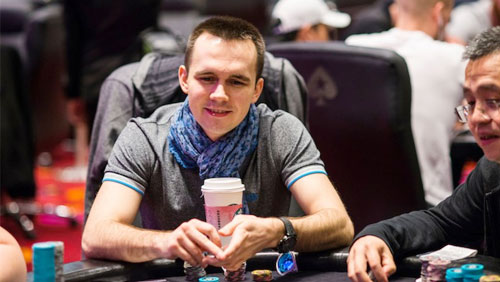 The Triton Poker Series Main Event in Jeju, South Korea, has reached the final table, and Mikita Badziakouski is in with a shout of winning back-to-back Triton Main Event titles, and with it, more than $5m in prize money.

I’ve spent all week asking the world’s greatest poker players to describe the state of flow. With one exception, everyone I asked spoke of the physical sensations when associated with being in the zone, but nobody spoke of the effect the environment has on finding this state.

I would say it does.

I don’t think that’s a fluke.

Richard Yong should feel at home with Triton because he created the bloody thing.

These three former champions prepare to face Sergio Aido, Sam Greenwood and Chan Wai Leong for the chance to win the most significant single payout outside of the One Drop and World Series of Poker (WSOP) Main Event.

James Chen was the first person to lose all of his chips. Chen’s KsJh squared off against the AJss of John Juanda on a flop of Jc5c2d, and the dominated hand wilted to nothingness. Chen did re-enter though.

Then we lost Winfred Yu, and he didn’t resurface.

Ivan Leow raised to 13,000 on the button, Yu three-bet to 36,000 from the small blind; Leow called. The dealer delivered a wet looking Jh8c7h onto the board; Yu continued with a 55,000 bet; Leow called. The turn was the Jd, Yu checked, Leow bet 100,000, Yu moved all-in, and Leow called. Yu showed KJo for trips, but Leow was ahead with T9o for the straight. The river changed nothing. Yu was out. Leow took the chip lead.

Mikita Badziakouski won a big hand off Bryn Kenney before taking out Gabe Patgorski. The Belarusian opened to 17,000 holding pocket nines, Patgorski three-bet to 56,000 with the J9o in position, and Badziakouski called.

Badziakouski, who was ahead with a pair of nines and a straight draw, decided to lead for 40,000, Patgorski moved all-in for 347,000, and Badziakouski said let’s go. The turn and river bricked for Patgorski, and he was out, never to return.

Other players to exit in this level included Xuan Tan, Richard Yong, and James Chen, the latter getting it in pre-flop with KTss<KJo of Stephen Chidwick.

Nick Schulman was in fine fettle after winning the HKD 100,000 (USD 12,500) Short-Deck event, but he had to settle for a place in the wings of this one after moving all-in on the button with K7o, and getting eaten alive by Sam Greenwood ATo in the big blind.

Schulman wouldn’t re-enter, but John Juanda and Jason Koon did. Juanda lost all of his chips to Leow when his KK lost out to A7o, pre-flop, and Koon found himself in a dominated position AQ<AK in a pre-flop all-in collision with Steve O’Dwyer.

Then we lost Wai Kin Yong. The two-time Triton Champion went for it holding A9ss, and Badziakouski pushed him out of the door with pocket eights. And Phil Ivey doubled up twice, once with QQ>44 of Sam Greenwood, and another time with AQ>A7 of Badziakouski.

Then the registration ended.

The first prize was a quarter of a million more than Justin Bonomo took for winning the 2018 Super High Roller Bowl.

Paul Phua got it in holding pocket sevens in a blind war with Bryn Kenney who was holding A8. Kenney, who was in for multiple bullets, hit an eight on the river to send Phua packing.

Sam Greenwood eliminated Phil Ivey when his pocket sevens won a flip against the AThh of the living legend. And then we lost Dominik Nitsche. The German flopped top pair with K8 on an 8c5h2h flop, and moved all-in over a Chan Wai Leong c-bet, only for Chan to reveal QQ for the stronger pair.

We lost the Global Poker Index #1.

The action got serious on the turn. The board showed Qs4h3c8s, with Koon holding Qc6s for top pair, and Chidwick chasing a flush draw and one overcard holding KJss.

Patrik Antonius moved all-in for 300,000 holding 43ss on the button; Sergio Aido looked him up with pocket queens in the blinds, and that’s all she wrote.

O’Dwyer was next to fall after losing a flip against Jason Koon. Peter Jetten sent Kenney to the rail after winning another flip, and Peters joined them after running deuces into Sergio Aido’s pocket tens.

And then the ultimate test of subconscious soft-play.

Luc raised to 50,000 on the button holding QdTh, and Sam called in the big blind with 74cc.

Sam rivered an unnecessary flush, and Luc was out.

With eight players remaining you could feel the bubble tension. It’s not every day that these players compete on a USD 867,000 bubble, and it was Peter Jetten and Ivan Leow who would never forget it.

Jetten went first in a cooler versus Richard Yong. The Canadian got it in with AKss, only for Yong to show up with pocket aces. Jetten flopped a king, but there were no more surprises in the deck.

And then we lost the man who was in for a million bucks.

The final table recommences at 2 pm (local time) where we play down to a winner.

3 Barrels: Badziakouski has a patch; Payne has charity; Nicholson has a title
Lee Davy
9 January 2019