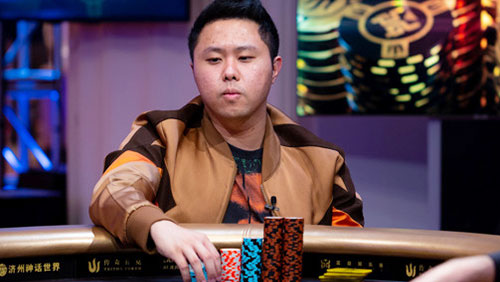 If my daughter turned out to be a hooker, I would spend a few sleepless nights wondering where I went wrong?

But what if she became a poker player?

Watching Kenneth Kee’s post-victory PokerNews interview with Sasha Salinger, I sensed an aggressive button edge in his voice when he spoke about his lack of game time in tournaments.

Commenting on Salinger’s question: “When was the last time you played in a tournament?” Kee responded that it had been 5-6 years before his momentum led him to say this:

“Being a cash game player you’re not in the media and stuff, but this is good because it shows that I am doing something I am in control of and not being a degen or something.”

I highlighted the not because it was at this point in the conversation that I saw a little devil walk from eyeball to eyeball, and I get the feeling Kee’s decision to be a professional poker player hasn’t gone down to well in Kee Towers.

“What will you do with your trophy?” Salinger asked him.

“I am going to give the trophy to my Mum.” Replied Kee.

Let’s hope he doesn’t hit her over the head with it.

That’s not a mistake.

And they call it gambling.

The cheek of it.

The event attracted 60-entrants, and the organisers had to put on an impromptu third day of action after Kee, Cary Katz and Triton founder Richard Yong couldn’t be separated.

Here’s how it went down:

The first big clash of Day 3 came between Kee and Yong.

Katz limped with Q9cc from the first position, Yong raised to 560,000 with A8o, Kee called on the button, and Katz made up the difference.

The action checked to Yong who bet 850,000, Kee called, and Katz threw his hand into the muck.

A disaster for Yong who turned an inferior two pairs. The Triton founder checked, Kee bet 1.7 million, and Yong called.

Kee hit a full-house, but it wasn’t a good card as it counterfeited Yong’s two pairs. Yong checked Kee bet 2 million and Yong was out of the hand before you could say crushing heat.

Katz then doubled through Kee to move into the second spot. Kee opened with AQo, and Katz called with KJdd in position. The flop was KQ6r, and the pair got it in with top versus middle pair and the top pair held.

And then we lost Yong.

First to act, Kee bet 500,000 with AQo, Yong called in position with JTo. The flop came down Q99r, Kee checked, Yong bet 200,000, Kee moved all-in, and Yong called. The former Triton Poker Champ needed a king or an eight, but neither type of card emerged from the deck, and we were heads-up.

Katz never got a look in.

The final hand saw the American move all-in holding JTo, and Kee called with pocket queens. Katz needed a little help, but with Kee holding most of his straight blockers, nothing much happened, and Kee was declared the champion.

It’s worth noting that Ivan Leow has now cashed in all three Triton Poker Series Short-Deck events, finishing seventh in the HKD 100,000, winning the HKD 500,000 version, and finishing sixth in this one.