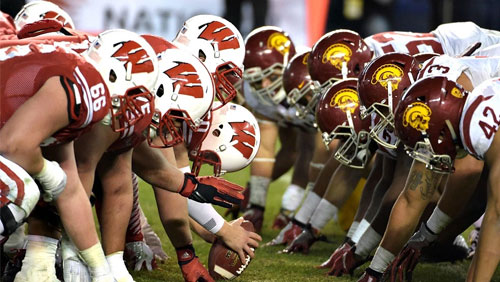 With college football’s fall camps on the verge of opening around the country, we have a trivia question for you: Which team brings the longest winning streak – 13 games – into the 2018 season?

Sure, devout college football fans might know the answer, but it’s a school a bit off the radar: Central Florida of the American Athletic Conference. Previously, UCF football was probably best known as the alma mater of Daunte Culpepper (or Brandon Marshall or Blake Bortles) or the last coaching stop of George O’Leary. He took that job a few years after he embarrassingly resigned from Notre Dame just a few days into his tenure in 2001 when inaccuracies over his resume came to light.

UCF officials have claimed a “national title” from 2017 – including rings to players and coaches, a banner at the home stadium and a parade – because the Knights were the only unbeaten FBS team in the country and in the Peach Bowl beat the team, Auburn, that beat the national champion, Alabama, during the regular season.

While UCF brings back star quarterback McKenzie Milton, a Heisman Trophy candidate, and a handful of other key starters from that squad, it is a +25000 longshot to win this season’s national championship. No non-Power 5 school has made the College Football Playoff. Central Florida will be in the preseason Top 25 but even another unbeaten regular season and AAC title likely won’t be enough to give the Knights a playoff opportunity.

The usual suspects are the national title favorites: Alabama (+180), Clemson (+550), Ohio State (+750) and Georgia (+850). The Crimson Tide rallied to beat the Bulldogs in last year’s title game. Last season was also the first time that one conference (SEC) got two schools into the four-team playoff. Don’t be surprised if the playoff expands to eight teams within five years, but that’s a story for another day.

One interesting/risky team is Michigan at +2000. It might not be accurate to say that head coach Jim Harbaugh is on the hot seat entering 2018, but Harbaugh hasn’t been able to beat his two biggest rivals, Ohio State and Michigan State. In addition, by some metrics the Wolverines have the toughest schedule in the country.

On the bright side, that means UM would have a great shot at a playoff spot even with one loss. On the negative, it will be tough to lose just once. The Wolverines face six teams that finished last season in the Top 25, starting Week 1 at Notre Dame.