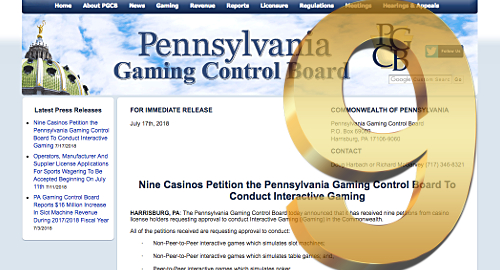 Nine Pennsylvania casino operators applied for online gambling licenses ahead of Monday’s deadline, according to the state gaming regulator.

On Tuesday, the Pennsylvania Gaming Control Board (PGCB) confirmed that nine of its 13 brick-and-mortar casino licensees had applied for the multi-vertical (slots, table games, poker) online gambling licenses by the close of business on Monday.

That leaves the operators of the Meadows Racetrack & Casino, Mohegan Sun Pocono, Presque Isle Downs and Lady Luck Nemacolin on the sidelines. Presque Isle was recently acquired by noted online gambling fans Churchill Downs Inc, although the deal has yet to formally conclude.

Under normal circumstances, Sands Bethlehem’s interest in online gambling would have seemed an anomaly, given Las Vegas Sands’ owner Sheldon Adelson’s hatred of the online game, but the property was sold in March to the Poarch Band of Creek Indians, who evidently have a more progressive mindset.

Pennsylvania’s all-in-one online licenses carry a fee of $10m, while the PGCB will now open a 30-day window in which operators can apply for individual slots, table games and poker licenses at a rate of $4m apiece. If there’s any licenses left after August 14, other “qualified gaming entities” will be allowed to join the license derby.

Under state law, the PGCB has 90 days in which to approve or reject the current crop of license applications. Given that the licensees are all well familiar to the PGCB, it’s hard to imagine what grounds would arise for rejection, but you never know if someone spilled a drink on chairman David Barasch at last year’s Christmas party and the guy just won’t let it go.