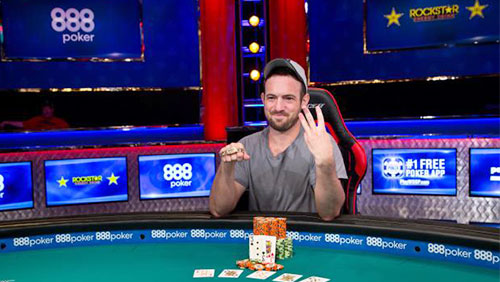 Another look at the guts of the greatest show on earth as the World Series of Poker Main Event waves bye-bye to Day 6 with Joe Cada searching for Main Event title number two.

Day 6 of the World Series of Poker (WSOP) is in the books, and Aram Zobian leads the way.

“I have never run this good in a tournament,” Zobian told PokerNews during the wrap-up.

The day began with 109 players taking an early shower courtesy of an electrical outage. Rio had paid the bill. The universe felt the need to show the WSOP that it’s not the greatest show on earth.

26 players remain in the hunt for $8.8m and the most coveted title in poker after the day came to an end without interruption from the weather.

Here’s how the day went down.

The last women in the tournament Kelly Minkin woke up on the right side of the bed when she doubled through Ricardo Souza AT>66, flopping an ace. Alexander Ziskin eliminated the WSOP Player of the Year front-runner, Shaun Deeb, when his pocket kings showed the queens who rules the castle. And the World Poker Tour (WPT) Champions Club member, Chanracy Khun picked up some chips after eliminating Nicholas Cushman AK>KK, flopping and rivering two of the three aces that remained in the deck.

Alex Lynskey eliminated the dangerous Serb, Ognjen Sekularac when his pocket nines survived a five-card sprint against KQ. Shannon Shorr doubled up when eliminating Danny Qutami AA>AT on a queen-high flop. And the WSOP bracelet winner Jack Duong sent Seth Foster to the rail 77>AJ. Foster flopped an ace, but Duong rivered a set as all good champions do.

Jorden Fox took the chip lead when he eliminated Alexander Gross. All the money went in on the river with Fox holding JTs for the nuts on 9835Q, and Gross left after showing T8 for a pair and straight blocker. Khun was at it again, this time eliminating Sharukh Shaw QQ>AK. And somewhere along the way, the wheels on the bus of Jack Duong fell off.

James Obst eliminated the Raising For Effective Giving (REG) Founder, Stefan Huber, AK>A8, and with it likely killed 20,000 factory farmed cows in the process. Sylvain Loosli reminded everyone that he had a map to the final table eliminating Cole Miller AA>KK. And Obst continued hacking away at anybody who stepped into his path, this time Joey Fabre feeling the full brunt force trauma of the Australian when his nut flush draw didn’t connect against Obst’s top pair.

Peter Campo eliminated the WPT Champions Club member, Jordan Cristos 77>AQ after flopping a set. Ben Pollak continued bleeding chips when he lost a race 66<AK versus Ricardo Souza. And Antoine Labat scored a substantial double knockout when his AA held up against the KK of Michael Feil, and the QQ of Brent Ballentine. The chip lead was Labat’s just desserts.

Konstantin Beylin eliminated the WSOP bracelet winner Mike Cordell AQ>44. The money went in on an AQ4 flop, with Cordell holding bottom set versus top two pairs, but Beylin filled up on the river. And Tony Miles sent the High Stakes player Jaime Kaplan to the rail AK>AJ.

The Day 5 Chip Leader, Michael Dyer, doubled through James Obst in a monster pot that saw Dyer’s pocket tens crack the aces of the Australian when a ten appeared on the flop. Antoine Labat eliminated Mark Zullo AK>A2. And Frederik Jensen made sure a woman wouldn’t win the 2018 Main Event when he sent Kelly Minkin packing AK>AT.

James Obst doubled through Ming Xi AJ>AK when a jack moved out of the box and sailed down the river. Aram Zobian eliminated Chanracy Khun QQ>AJ, before taking the scalp of Artur Koren when his AQ found a partner on the flop to crack kings.

Zobian had turned into a one-man wrecking crew, and his next victim was Obst when his pocket kings bested the A7 of the short stack. Joe Cada doubled through Alexander Haro 99>77. And Ryan Phan ensured Pollak wouldn’t make back-to-back final tables when his AJ pushed the Frenchman’s A9 into the rail.

They may not be in the World Cup, but they’re in the WSOP as the Brazilian Paulo Goncalves eliminated the three-time bracelet winner, Brian Yoon, AA>33. And Artem Metalidi won a massive pot when his pocket kings beat the AK of Zobian, and the AT of Jan Mach, the latter a fatal blow.

Samuel Bernabeu sent Shannon Short packing in 39th place when his pocket aces ripped AJ to pieces. Metalidi continued his ascent sending Henrik Hecklen to the cash desk in 38th after 77 beat QT thanks to a rivered flush after the Dane had flopped top pair. And Martin Gerrits eliminated Ricardo Souza in 37th place KK>98o.

Zobian moved into the chip lead when he eliminated India’s last remaining hope, Nishant Sharma, with aces versus queens. Peter Campo’s experience ended in 33rd place when his AK failed to beat the JJ of Labat or the KK of Jensen. And Gerrits was at it again this time sending Andres Jeckeln back home to Uruguay when he caught his draw all-in against top pair.

Fletcher departed in 28th when his KTs lost out against the KQ of Yueqi Zhu. Barry Hutter tripled up when cracking Lynskey’s aces with pocket treys. And Jorden Fox’s elimination at the hands of Dyer brought the day to an end when his pocket jacks lost to the two pairs of 97s.