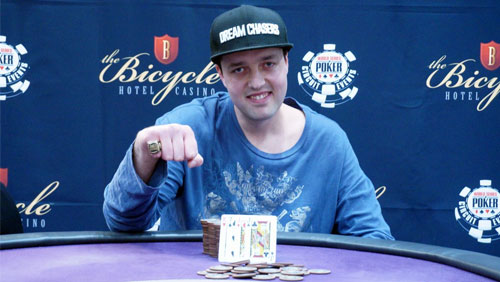 Another round-up from the World Series of Poker this time focusing on victories in mixed game events by David Brookshire and Jay Kwon.

Imagine being Mihaly Csikszentmihalyi, living in London, and one day you meet a cutey pie in a record store who falls in love with you over a special edition of Bee Gees Night Fever.

“Your name is what?”

I don’t care how much you know about the state of flow. Nobody is going to remember how to say that name.

As the buff-tailed male bumblebees began bombing purple sensations, oriental poppies and Susanna Mitchells, Brookshire was experiencing something Csikszentmihalyi refers to as flow.

Vernix still covered the World Series of Poker (WSOP) when Brookshire made the final table of a $150 buy-in No-Limit Hold’em Rio Daily DeepStack. He didn’t win it, Joseph Mancini did, but Brookshire took ninth, and with it, pulled on a thread that began untangling in the most delightful of ways.

A week later, a confident Brookshire entered the $800 buy-in Pot-Limit Omaha side event at the Mid-States Poker Tour (MSPT) at the Venetian and beat 127 entrants to win a personal record of $20,580. Sticking with what works, Brookshire entered the $655 Omaha 8/Stud 8 mix at the same event and finished 2/160 for another $13,861.

It was time to take a punt at a more significant buy-in.

It was time to see how flowy this flow thing really got.

When Brookshire deposited the $2,500 needed to compete in the Omaha Hi-Lo 8 or Better/Seven Card Stud Hi-Lo 8 or Better, I doubt he truly believed he could win it. Phil Ivey would. Daniel Negreanu would. Jean-Robert Bellande would.

But by the end of Day 2, as 152 people survived from a starting field of 402, he must have been beginning to at least dream about the possibility.

Sergio Ramirez ended the day with the chip lead. The two Mizrachi brothers were in contention, as were Ivey, Daniel Negreanu, John Hennigan, and Jeff Lisandro.

Day 2 saw 61 people make money. Brookshire was one of them. Those that didn’t make it include all of the luminaries mentioned above except Robert Mizrachi. Those that joined Brookshire in the money earned column were Marcel Luske (58th), Ray Henson (54th), Joe Hachem (49th), Robert Mizrachi (45th), Ian Johns (38th), Scott Clements (33rd), Dzmitry Urbanovich (27th), Sergio Ramirez (22nd) and Cyndy Violette (13th).

Ian Shaw had the chip lead.

Brookshire was in the middle of the pack.

Hope replaced by desire, belief, but a conviction?

As the day progressed, I would have loved to have been a parasite inside Brookshire’s mind. To feel what he felt as one by one a player hit the rail and he kept moving up the pay scale.

By the time the final table came into view, he and Hani Awad saw it before anyone else, neck-and-neck at the top of the chip counts. All told, there were four bracelet winners at the final table in Awad, Brendan Taylor, Daniel Ospina and Eric Rodawig.

Heads-up and Brookshire faced Taylor with a 3:1 chip lead. The WSOP bracelet winner quickly went about his business dismantling Brookshire’s dreams, and before long it must have felt like he was stuck in a cobweb watching the spider crawling out of the steel pipe.

Remember, Brookshire was in a state of flow.

The Csikszentmihalyi in him kicked in, and he fought back to win the bracelet.

Will we remember him?

And Brookshire won’t care one little bit, because unlike you and I, for a fleeting moment in his life, he experienced timelessness.

From one poker player, I don’t know to another.

Jay Kwon told PokerNews after his win in the baby Razz that he is somewhat of a Razz specialist.

I used to be a razz specialist, but that was back when I used to go on the razz; not play the game.

It sounds as odd as someone standing up at Vanessa Selbst’s birthday party to give a speech on Donald Trump’s manifesto.

Day 1: Hellmuth in the Mix

In total, 45 bracelets were entering Day 2.

Kevin Iacofano led the final table. Jay Kwon began in fifth place. The tantalising tunes of Adam Owen and Dzmitry Urbanovich were also in the jukebox.

The heads-up action would go down between Urbanovich and Kwon. It’s not often that the Pole is the underdog, but I have a feeling that’s the case in this one. 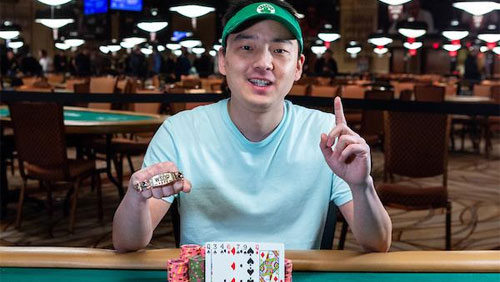 Urbanovich took a 3:1 chip lead at one point, but Kwon knuckled down, retook the lead, and never lost it.

The Pole will win his bracelets.

For now, the honour goes to Kwon, the only Razz specialist left on earth.