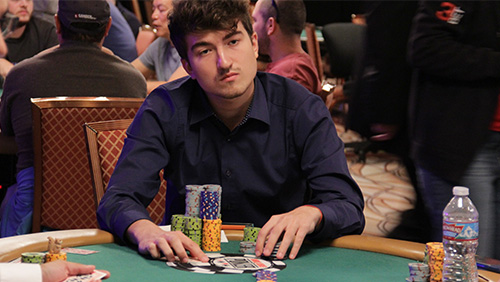 All time live tournament money earner in Poland, Dzmitry Urbanovich, has been rewarded for his success by signing a sponsorship deal with one of the largest online poker rooms in the world, but which one?


It was only one sleep ago that I was writing about the exodus of gambling companies from the Polish market. In the middle of those 600+ words, you may have noticed that I proposed the Polish Gaming regulators should have given the job of writing the live tournament regulatory guidelines to Dzmitry Urbanovich.

They are too late.

He has a new job.

The Global Poker League (GPL) Moscow Wolverine has been picked up by an online poker room to act as an ambassador for partypoker.

Partypoker is on a rampage at the moment. They are paving the way for new formats of live tournaments, offering £1m first prizes to the champions, and hiring some of the game’s top brass in an attempt to get noticed.

Urbanovich joins his Moscow Wolverine Team Manager Anatoly Filatov who joined partypoker in the wake of the Million event held in Sochi, Russia. Urbanovich won an H.O.R.S.E side event in that competition, and also featured in the MILLION event in Dusk Till Dawn (DTD). He is currently in Montreal wearing the partypoker patch for the first time at the partypoker Millions North America at the Playground Poker Club. He will also be more vocal on social media to promote the forthcoming $20m Guaranteed Powerfest event in early May.

Urbanovich is the Polish all-time live tournament money earner on The Hendon Mob with over $5m in earnings. His biggest cash came in 2015 when he finished runner-up to Erik Seidel in the €100,000 No-Limit Hold’em Super High Roller on the European Poker Tour (EPT) for $1.5m.

The move is an interesting one given that Partypoker is one of the few top brands that decided to stay in Poland post the new April 1 regulations. Urbanovich is one of the best European poker players on the live and online circuits and will provide a lot of exposure for the brand in his home country and globally.

Most importantly, it sends a statement out to the rest of the poker community.

Partypoker is where the party is at.