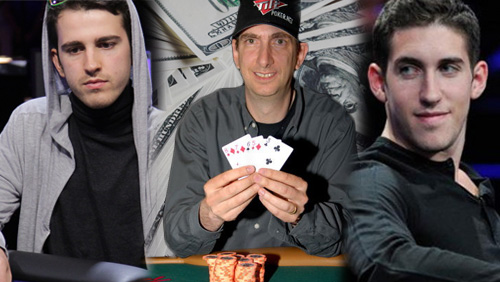 Koray Aldemir and Dan Colman pick up titles at the Triton Super High Roller Series in Manila, and Erik Seidel moves closer to Daniel Negreanu at the top of the All Time Money charts.


The new year has begun with a young German in his 20s, hailing from Vienna, taking down a seven-figure score.

Fedor Holz began 2016 by winning the $200,000 Triton Super High Roller for $3.4m and used that result as the nitro-glycerine needed to power on and win $16.4m in all competitions.

Does Koray Aldemir have the gumption to do the same?

This event was last held in Nov 2016 with Wai Kin Yong finishing first, Bryn Kenney second, and Sergio Aido third, and all three featured in the final table of this one.

Aido, who started the final table as the chip leader, would ultimately leave with the most money after cutting a three-way deal with Aldemir and Daniel ‘Jungleman’ Cates. You can expect big things from the Spaniard in 2017. Six days ago, Aido won the HK$10,000 Macau Poker Cup for $267,302 and has found a rhythm in these high buy-in events.

Aldemir is no shrinking violet, finishing 10th in the Aussie Millions Main Event for $117,061, and taking home $2.5m from the WSOP in the summer, including a third-place finish in the $111,111 One Drop High Roller.

Dan Colman is another player at the top of his game.

The former One Drop winner came into the Triton Super Series with over $1m in winnings from the PokerStars Championships in the Bahamas, and has banked another half a milly with victory in the HK$250,000 Six-Max event.

He even smiled for the winner’s photo.

The event attracted 43 entrants and created a prize pool of HK$10,113,600. Seven players made the money including that man Sergio Aido and Super High Roller Bowl winner Rainer Kempe.

But special mention must go to Erik Seidel. The Peter Pan of Poker came second for $299,721, closing the gap between him and Daniel Negreanu at the top of the All Time Money List to $1.5m.

Seidel has sat on that throne before, and I expect him to take it back from Negreanu by the end of the year. The New York legend is a mainstay on the High Roller circuit. Daniel Negreanu isn’t. And for that reason, and Seidel’s sheer consistency of results, I think we will see a shift in power before 2017 ends.