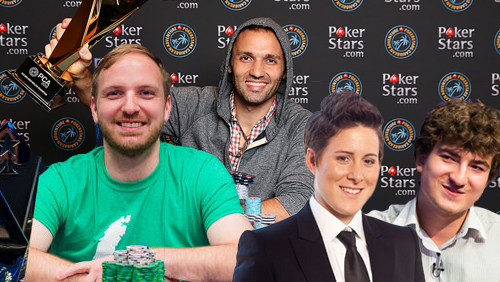 Maimone played possum to perfection in the following hand courtesy of PokerNews.

Sean Winter raised to 180,000 from under the gun; Maimone flatted on the button, and Josh Beckley called in the small blind.

Maimone bet 300,000 when checked to, and only Beckley called.

Maimone had Beckley covered when in a flagrant disregard for his opponent’s soon to be shattered heart he said, “this is a tough one,” before calling. Beckley turned over [As] [5s] for the nut flush, but Maimone showed [Js] [9s] for the straight flush.

Beckley was out in fourth.

“He just kind of bothered me a few times yesterday and today, just his demeanor rubbed me the wrong way,” the usually philanthropic Maimone told PokerNews.

Maimone eliminated every player at the table en route to his largest-ever score of $996,480. He will need every penny. The Maimone family is going to be extended by one more come May.

The event attracted 225 entrants and created a total prize pool of $5.4m.

For a minute, it looked like Mike “SirWatts” Watson had made mincemeat of my claim that Roberto Romanello would be the next player to join the Triple Crown fraternity after winning the PokerStars Caribbean Adventure (PCA) Main Event for $728,325.

Upon further inspection, I remembered that the WSOP decided NOT to hand out a bracelet for that event given the smallish field size (only 60 entrants). So, my prediction is alive and well, but Watson is more than capable of smashing it to pieces in the summer.

It was an incredible victory for Watson.

Obviously I win the PCA the year they cut the buy-in in half. When will it end.

Vanessa Selbst is set to become embroiled in one of the most interesting WSOP bracelet bets of the summer.

A multiple bracelet winner herself, she knows how tough it is to win one, let alone three in a single series. That’s the feat that the young Pole Dzmitry Urbanovich believes he will accomplish when he plays in his first-ever WSOP this summer.

Selbst doesn’t believe him; so much so, that she offered Urbanovich odds of 200:1 to accomplish the feat, and the Pole flicked her $10,000 on the spot. Should he win the bet, he will pick up a cool $2m.

During an interview with Maria Ho, Selbst explained that she would sell off her bet at a loss if the ghastliness of it started to become all too apparent should Urbanovich bag bracelets one and two.

Only Phil Ivey, Phil Hellmuth and Ted Forrest have ever won three bracelets in a single series.