If you have little time left on this planet, what will you do? 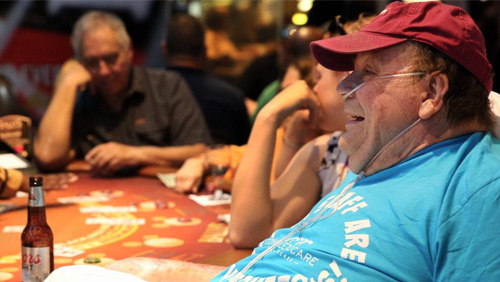 Perhaps most of us would spend much of our time with our family cherishing every second and making them feel loved. Some would fix broken relationships or make amends to the people they’ve caused undue pain. Ultimately, it is about seizing the moment and not letting time pass by—and that’s what a terminally ill New Jersey man has done when he learned that his time was short.

The Press of Atlantic City reported that 71-year-old John Mudry got his wish to have one last big day at Bally’s Atlantic City on Tuesday, and it was made possible through the efforts of his family and the help of his hospice caretakers and health care providers.

Mudry, who is suffering from non-treatable bladder cancer, chose to live his life to the fullest by enjoying a couple of cold beers and playing a few more hands of blackjack instead of moping around and feeling sorry for himself inside his hospice, according to the news outlet.

The septuagenarian made simple wishes to his family when he learned that his health was deteriorating and that his days were numbered. Some of those wishes include drinking Dr. Brown’s Cream Soda and munching on his favorite snacks of Vienna vanilla cookies. Mudry’s wish to visit Bally’s for the very last time was the most special. It was like asking someone to take him home, he said.

“I liked coming to Bally’s, they treated me good here,” Mudry said, according to the news outlet.

Inside the casino, Mudry prayed to hit a big jackpot in the blackjack table for his great-niece Ryan Smentkowski. Mudry knew that he wouldn’t be around to see Smentkowski walk the aisle that’s why he was hoping to rake some big bucks that day and give it as wedding gift to his niece.

Though he didn’t win the jackpot, Mudry was able to hand over a few hundred dollars that he won that day.

“We partner with many community groups,” Caesars Entertainment Public Relations Director Noel Stevenson said, according to the news report. “If you had one wish like this, to spend the day and enjoy yourself, we’re happy to help.”