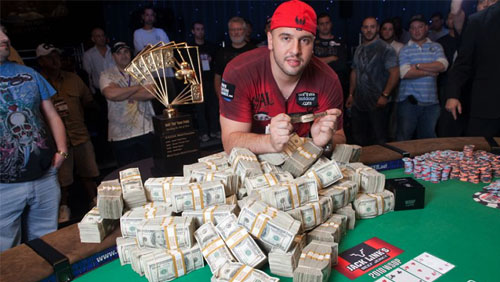 Another round-up from the World Series of Poker this time focusing on a record-breaking third victory in the $50,000 Poker Players’ Championship by Michael ‘The Grinder’ Mizrachi.

Charles Bukowski once wrote that he had lived during an era of ‘no writers at all.’

“Nothing else appeared, o.k., it’s a bad age,” said Bukowski in the poem Voices, “I suppose I am number one. But it’s hardly the same as when we had giants turning us on. Forget it: I’m living green.”

Despite winning $17m in live tournaments, and numerous titles including four World Series of Poker (WSOP) bracelets and two World Poker Tour (WPT) titles, Mizrachi’s style amongst the giants produces a frown or two. There’s no getting around it, Mizrachi is the bottle of brown sauce in the condiments box on the table of a cheap burger joint.

And he knows it.

During an interview in Barcelona, back in 2017, Mizrachi told me, honestly, about how difficult it is to play Hold’em now that everyone is so much better, and how smart it is to avoid the game altogether.

“If I could choose any game to play, this {Hol’dem} is the last game I would choose,” Mizrachi told me.

But stick the man in a mixed game tournament; suddenly sauce turns from brown to red. I don’t know if his mixed game is up to much. I’ve never asked anyone of any ilk to comment, but it’s hard to ignore his stats.

He not only leads the number of titles won. Nobody has made more final tables (4), and he’s the ITM joint leader (Hennigan, Andy Bloch and Mizrachi have four each). I think it’s safe to say that Mizrachi knows enough about the mixed game scene to cause a ruckus.

Mizrachi took the lead as early as Day 2, and he maintained it at the end of Day 3, 4 and 5, entering the final table with twice the chips as his nearest competitor, Dan Smith.

It goes to show the power of the PPC when the only player not to win a bracelet on the final table is Smith. The King’s run ended in third place when he failed to hit his open-ender against Hennigan’s AK.

Hennigan was on a heater, making his third final table of the summer, including his bracelet win in the $10,000 H.O.R.S.E. Mizrachi came into the final stage on a life heater, having emerged from a mid-life reassessment determined to be a better role model for his children.

The final encounter between these two WSOP titans was over in the flash of an ad break. Hennigan pulled a few pieces of plastic back until Mizrachi took a 3:1 chip lead after a hand of 2-7 Triple Draw went in The Grinder’s favour.

The game that Mizrachi has been so successful in, but would rather avoid, would become the axe he would use to deliver the final blow.

Mizrachi raised to 225,000 from the button, Hennigan three-bet to 750,000 and Mizrachi called. The final flop of the tournament was Qh9s5h, and all the money went in with Hennigan, the aggressor.

Hennigan showed JTo for the open-ended straight draw, and Mizrachi showed 98hh for a middle pin and flush draw. The Th landed on the turn to give Mizrachi the title, who disappeared into a sea of family and friends as the somewhat unnecessary 8d fell on the felt.

Back to that chat, we had in Barcelona, and I asked The Grinder why everyone wanted a piece of him.

“It’s all about character,” he told me. “When you’re hot everyone wants you. When you’re cold, you have to put the work in.”

Hennigan’s runner-up finish, his third top-two placement of the summer making him the favourite to win the WSOP Player of the Year award. The data crunchers haven’t recalibrated the charts, but by my reckoning, he will have taken the lead from Elio Fox after this performance.