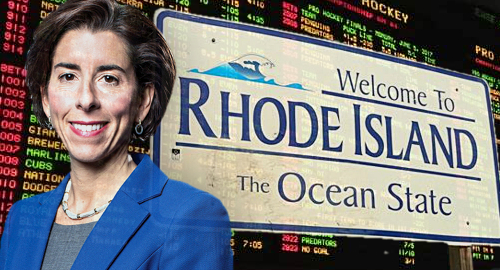 Rhode Island is but a governor’s signature away from becoming the seventh US state to have legal sports betting laws on its books.

On Wednesday, the Rhode Island senate approved the state’s fiscal 2019 budget, and Gov. Gina Raimondo said she intends to sign her approval by Friday. The $9.6b budget includes $23.5m that the state expects to earn as its share of the first year of legal sports wagering.

Rhode Island’s plan is to allow the state’s two brick-and-mortar Twin River casinos to offer sports betting. The betting technology will be provided by IGT, which already powers the state lottery and was the sole bidder for the tech contract in May.

IGT’s share of the betting revenue is projected to be $14.75m, while the casinos will take home $7.8m. The estimates are based on a somewhat optimistic projection that the casinos will handle around $910m worth of wagers from a population of just over 1m souls and with no web or mobile wagering in the state’s current betting language.

NEW YORK GRIDLOCK
If Rhode Island is a sports betting guppy, New York would be a blue whale. Sadly, it appears certain that New York will not be joining the betting brigade this year, as legislators expressed little hope of achieving consensus on their wagering bills before their session concludes Wednesday night.

North County Public Radio quoted Senate Majority Leader John Flanagan saying the senate’s betting bill had been left on the table with no agreement. The Assembly’s bill also failed to come up for a vote on Wednesday, and there were still a number of infinitely more pressing items left to be resolved before lawmakers could go home.

CONGRESS CALLS TIME OUT ON BETTING HEARING
While New York will wait until next year, Congress will wait an unspecified duration to hold its hearing on the possibility of imposing federal wagering regulations. The House Judiciary Committee had scheduled a hearing for June 26 but ESPN’s David Purdum reported that the Committee decided Wednesday morning that it would have to reschedule, allegedly due to more pressing matters taking priority.