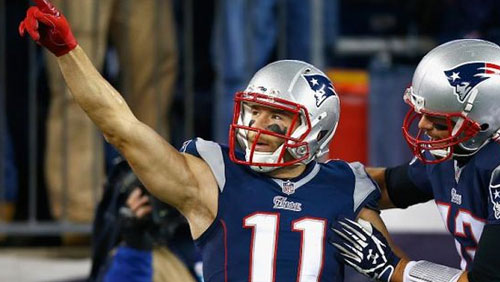 Since a then-fairly unknown sixth-round quarterback out of the University of Michigan named Tom Brady took over as the New England Patriots starter early in the 2001 season, probably the safest bet in sports has been on the Patriots winning the AFC East Division.

The only times they haven’t claimed the AFC East since that season were in 2002 (New York Jets) and 2008 (Miami Dolphins – and Brady was lost to a season-ending injury in Week 1).

No surprise, then, that New England is the biggest division favorite on the board by a wide margin for the 2018 season, priced at -650 to win the AFC East for a 10th straight year. There are many reasons why the Pats have dominated the East, but it really comes down to quarterback. They have Brady, and the other three teams have been cycling through guys.

Miami (+1000) still has QB questions with Ryan Tannehill, the Buffalo Bills (+1100) may open the year with A.J. McCarron but will eventually turn it over to rookie Josh Allen, and the New York Jets (+1500) could go with rookie Sam Darnold from Week 1.

The second-biggest division favorites in the AFC are the Pittsburgh Steelers at -280 to claim the AFC North for a third straight year. Again, it largely comes down to the quarterback position in this division. Pittsburgh has future Hall of Famer Ben Roethlisberger. The Baltimore Ravens (+400) have past-his-prime Joe Flacco, the Cincinnati Bengals (+1000) have so-so Andy Dalton, and the Cleveland Browns (+1200) have been looking for a QB since returning to the NFL in 1999.

Rookie No. 1 overall pick Baker Mayfield will take over in Cleveland sooner or later, although trade acquisition Tyrod Taylor (from Buffalo) should get the call in Week 1.

The two other AFC divisions look wide open. The Kansas City Chiefs (+275) have won the West the past two years but traded starting QB Alex Smith to Washington and will turn to second-year Patrick Mahomes under center. He has one start in his career, a meaningless Week 17 game in 2017. The Los Angeles Chargers are +175 favorites but have already lost talented tight end Hunter Henry to a season-ending knee injury. The Bolts haven’t won the division since 2009.

In the AFC South, the Jacksonville Jaguars won the division last year for the first time since 1999 and are +180 favorites to repeat almost in spite of their QB, Blake Bortles. The Jags have one of the NFL‘s best defenses, however. The Houston Texans (+185) might have been in the division race in 2017 had rookie superstar QB Deshaun Watson not torn his ACL in practice before Week 9. The Tennessee Titans (+333) finished a game behind the Jaguars a year ago despite sweeping the season series.