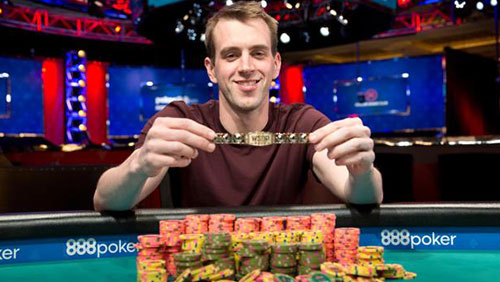 Another review from the World Series of Poker, this time focusing on Philip Long securing victory in the Eight-Game Mix, with Daniel Negreanu cashing for the first time this summer with a third-place finish.

I felt a pang of nostalgia when I woke to learn that Philip Long had won Event #22: $1,500 Eight-Game Mix. I haven’t played poker for a long time. I don’t have time to miss it. But this morning, learning about Long’s success, my memory jumped into the milk cart and headed back there.

Long became the 37th British player to win a gold bracelet, defeating 481 entrants, on his way to a $147,348 score. I imagine like most British players; Long learned all the games in the world playing live cash games in and around the UK pub and casino scene.

Walk into any pub, late at night, and you will find a group of men, the occasional woman, sitting in a circle, cash hidden from view, cards, chips and hope splattered all over a dirty looking green felt.

Long doesn’t have much of a Hendon Mob pedigree outside of a 29th place finish in the Main Event back in 2013 for $229,281, and faced some fierce competition once he reached the final table.

John Racener was making his second final table of the series after finishing eighth in the COLOSSUS, and the Sweden Poker Hall of Famer, Per Hildebrand, was doing the same after finishing ninth in the $10,000 Omaha Hi-Lo or Better Championship.

And then you had the star attraction.

It’s taken Daniel Negreanu 22 events to get off the mark this year, and when he made it to the final three players, he was the most experienced and skilled player left in the field, facing Long and Kevin Malis.

But you don’t get to the final table of the Eight-Game Mix without putting in the work in your own corner of the world. Also, flopping a set when your opponent flops two pairs helps. Malik did just that holding KK on a K54 flop, and Kid Poker held K4 in No-Limit Hold’em. The money went in on the turn, and Negreanu was out.

“It was scary with him in there,” Long told PokerNews after his win, referring to the presence of Daniel Negreanu.

With the leading man out of the way, Long and Malik settled down for a heads-up duel of even 113 bb stacks. Long took the early lead, Malik ran with it for a while, before Long won a couple of big hands in Hold’em and Pot-Limit Omaha to take a lead used to ground his opponent into nothingness.

After the match, Long told PokerNews that his strength lay in not having a weakness in any of the games.