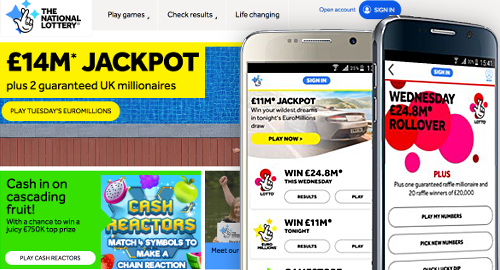 On Friday, Camelot UK Lotteries Ltd announced that National Lottery sales over the 12 months ending March 31 totaled £6.95b, a mere one-third of one percent higher than the total recorded in the company’s 2016-17 fiscal year.

Camelot’s recently appointed CEO Nigel Railton claimed that the minor uptick in sales was actually an impressive “achievement” given that disappointing results over the first half of fiscal 2017-18 had led the company to anticipate “a further sales decline” for the year as a whole.

Railton claimed that the late save was proof that initiatives the company enacted via its strategic review of operations – which was launched following last year’s 8.8% year-on-year sales decline – were starting to “play a part” in the company’s rebound.

However, Railton acknowledged that the second half resurgence benefited from “a nice run of luck,” i.e. a string of “incredible” jackpots that coaxed punters off their sofas and down to the cornershops to grab a ticket or two.

Actually, scrap that cornership comment, as sales at Camelot’s 45k retail partners were down by £100m to £5.3b in 2017-18. As part of its strategic review, Camelot is investing £20m in boosting retail engagement and recently doubled the size of its sales team, which led to around 5k retail visits per week, up from just 2k at this time last year.

Retail’s loss was digital’s gain, as Camelot’s digital sales hit a record £1.65b, up £130m year-on-year. Mobile channels accounted for a record-high 40% of overall digital sales, in part due to the launch of a new (bug-free for a change) Android app.

Railton noted that one of the ongoing challenges facing Camelot is “ever-increasing competition from the gambling sector.” Camelot has long railed against online lottery betting operators such as Lottoland for offering a more cost-effective option for betting on non-UK lottery draws.

Camelot has claimed that Lottoland can only offer punters better value because lottery betting operators aren’t required to funnel money to social causes. But while Camelot only promotes jackpots that are below its sales revenue for a particular draw, Lottoland runs the risk – a very real one, as it turns out – that it will have to pay out the full jackpot after taking in only a fraction of that jackpot’s value in revenue.