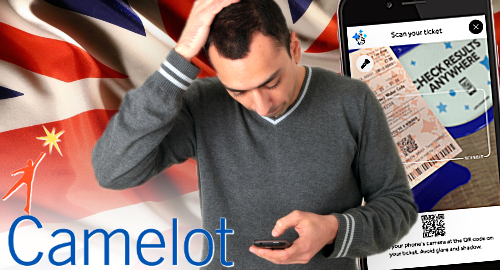 UK National Lottery operator Camelot has released a fix for its formerly wonky mobile app after nearly one month of downtime.

On Monday, Camelot UK Lotteries Ltd issued a statement saying it had released a new version of its National Lottery mobile app for iOS, promising that a new Android version was “currently being tested and is coming soon.” The statement (viewable here) contains instructions on how to download and install the new app.

Camelot was forced to pull its iOS and Android apps in late October after customers reported that both manual-entry and QR ticket scanner result-checking functions were incorrectly informing players that their tickets were losers when the opposite was true.

Camelot had come under widespread public criticism for reportedly ignoring numerous user complaints for over a week before finally admitting that the fault lay with its own technology. Monday’s message sought to reassure lottery players that, in addition to Camelot’s “usual rigorous testing” – which performed so splendidly the last time – the new iOS app had been “independently checked for extra reassurance.” (Still, one gets the sense that the National Lottery logo’s crossed fingers have taken on extra significance.)

Mobile was the star performer of Camelot’s fiscal H1 results, which were released last week. While overall National Lottery sales declined more than 6% in the six months ending September 24, mobile sales were up 13.5%. Camelot’s statement declined to offer any guidance on how H2’s mobile numbers might be affected by the month-long app shutdown, but one imagines the impact will be considerable.

In the meantime, Camelot continues to advise players to contact the company if they believe they may have thrown away tickets the app told them were losers in the two weeks spanning October 13-26. But players must act before 5pm on November 30 in order to have their claim considered, in keeping with Camelot’s policy on a 30-day window for lost, stolen or destroyed tickets.