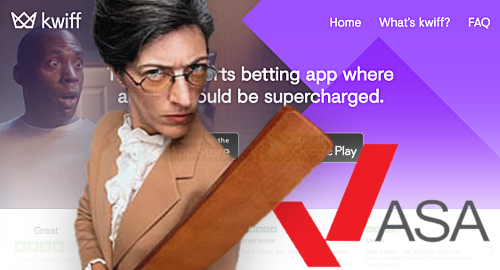 The UK’s advertising watchdog has slammed a betting operator for offering fake odds, something that is generally frowned upon by the betting public.

On Wednesday, the Advertising Standards Authority (ASA) upheld a complaint against Eaton Gate Gaming Ltd, which operates a mobile betting app in the UK under the Kwiff brand. Kwiff’s unique selling point is its propensity to randomly “boost or supercharge” a customer’s betting odds up to 2,000x higher.

Two punters complained about a Kwiff television commercial that claimed one of its customers had his odds on “Paris Saint Germain to beat Celtic” supercharged from 11/8 to 80/1. This claim was repeated both in the commercial voiceover and accompanying text, yet the complainants claim Kwiff had never offered odds of 11/8 for PSG to beat Celtic.

Kwiff’s defense centered around its claim that a punter had placed a £5 bet on “PSG to win & only one or no team scores” and that the advert displayed a ‘simplified version’ of this wager.

Horseshit, said the ASA, ruling that customers were likely to interpret the advert copy “to mean that those particular odds had been genuinely available to consumers for bets on PSG beating Celtic” without the additional qualification of “only one or no team scores.”

Kwiff had already withdrawn the ad following the complaint but the ASA warned Kiwff “to ensure that they accurately described any example bets displayed in their ads, and displayed the correct odds for that bet.”

The ASA also took matched betting site OddsMonkey to task for an online blog entry in which an individual named ‘Ben’ claimed to be making “guaranteed profits through matched betting,” averaging £20 per day.

The complainant believed Ben was a fictitious character and that the blog was giving a misleading impression that achieving similar profits in real life was possible.

The ASA upheld the complaint, without attempting to verify whether ‘Ben’ was in fact a living human being. The ASA did find that Ben’s ‘diary entries’ showed only winning days and thus were “not representative of the level of success OddsMonkey said their customers had achieved.”

The ASA also determined that Ben’s explanation of the match betting system – in which punters take advantage of rival operators’ free bet offers to place opposing bets on the same event, thereby cancelling each other out and collecting the profits on the winning wager, provided they meet the operator’s rollover requirements – was “long-winded and open to human error,” meaning punters were likely to lose money, particularly if they fell afoul of operators’ ‘bonus abuse’ and other terms and conditions.