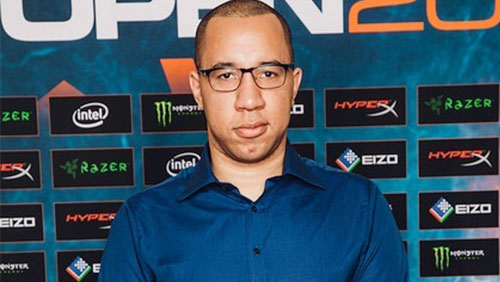 James Bardolph, Creative Director at FACEIT, tells Forbes magazine that the inspiration behind his crazy idea to host the Season 4 esports Championship Series finals at the Hard Rock Hotel in Cancún, Mexico came from the World Poker Tour.

There was a time when I looked upon the lush green grass of Wembley Stadium, and all I could see was Norman Whiteside curling the ball past Neville Southall with his wand of a left foot. Now, when I look at the hallowed turf, I see inflatable white domes.

In 2013, I was at Wembley for the International Stadiums Poker Tour (ISPT). A joke at the time, you had to be there to experience the monumental achievement of the organisers to host an event in such a vast, cavernous arena.

The lifespan of the ISPT was as fruitful as a blind snake charmer plying his trade in the Souks of Marrakech, but for that one fleeting moment, they dared to do something different, and anyone who was there will always remember, white domes and all.

Sure, you can follow the crowd, and join the race to the bottom.

You can try and find a spot of land that nobody occupies.

At the tail end of last year, ECS organisers FACEIT decided to have an ISPT moment in reverse. While poker finds it challenging to beg the casino cleaners to hang around for the final table of their major events, the likes of the ECS can fill cavernous stadiums with froth-spilling esports fans desperate for a glimpse of their Avenger like heroes.

So as ECS Season 4 was well underway, fans were expecting the finale to take place at one of these such venues.

ECS bucked the trend and held the finals in the Hard Rock Hotel in Cancún, Mexico.

The fans were left bewildered.

esports specialists in the media thought the idea was dumber than stealing a grape in said Marrakech Souk.

But James Bardolph has no regrets.

Speaking with Forbes magazine, the Creative Director at FACEIT and respected CS: GO caster spoke fondly of the decision to hold the finals without a single fan in attendance and laid the inspiration at the feet of Shania Hyatt’s red-glossed pinkies.

Bardolph is a poker fan, who, back in the day, spent countless hours watching the World Poker Tour (WPT) on DVD. One day, Bardolph saw the WPT anchor, Hyatt, opening WPT Aruba while riding a jet ski in her bikini – an image forever seared into his bank beginning with a ‘W’.

Over the years, as the image of Hyatt’s perfect frame moved into the basement of his subconscious, the thought of replicating the WPT’s move did not.

“I thought that was really cool,” Bardolph told Forbes.

When the opportunity presented itself, Bardolph took it. He booked as many rooms as he could, and moved the teams into the Cancún hotel.

“We don’t want to be generic,” Bardolph told Forbes.

I’ve searched the Google video archives, and I can’t find a shot of Bardolph in his mankini striding a jet ski anywhere, so I can assume, that part of the dream hit the cutting room floor.

The Link Between The World Poker Tour And esports

I can’t imagine Lynn Gilmartin taking on a jet ski, but one can hope.

The WPT has a close link to the world of esports as their daddy OurGame International also owns Allied Esports, and the pair has already worked together during the WPTDeepStacks in the Netherlands, and the WPT has plans to showcase live poker finals at the Esports Arena Las Vegas at The Luxor.

In February, OurGame International handed WPT President, Adam Pliska, a new four-year contract, and the press release stated that as part of Pliska’s role, he would look at ways to integrate esports and poker moving forward.

Pliska and his team have a fan in Bardolph.

The season after the ECS moved away from the stadiums to the compact and bijou world of the Hard Rock Hotel; they are back to the typical way of doing things with the Season 5 Finals due to take place at the 12,500 capacity Wembley Arena in June.

Bardolph remains the only person in the world who uses DVDs and methinks he will continue to do until the day he dies.