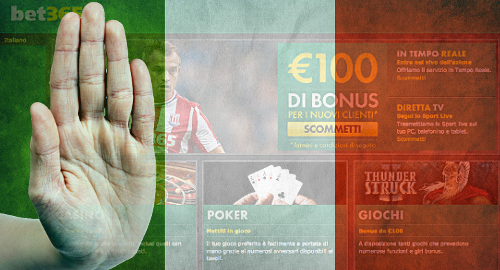 Italy’s problem gamblers now have a one-stop shop for excluding themselves from every licensed operator in the country’s regulated online gambling market.

Last week, Italian gaming regulator AAMS announced the rollout of a nationwide unique self-exclusion register (USR) that will allow gamblers to fill out a single online form – available via the regulator or gambling operators – to bar themselves from accessing Italian-licensed online gambling sites. Under the previous system, players were required to self-exclude from each site individually.

Once players have filled out the new form the online operator will have to immediately close the player’s account and forward the exclusion request to the central registry, after which all Italian licensees must bar the player from their sites. Players have the option of excluding themselves on a permanent basis or for a six-month period.

PLAYERS DOWN SOUTH, MONEY UP NORTH
Last week saw the Italian industry put under the microscope in the annual Online Gambling Observatory at the Politecnico di Milano. Researchers Marco Planzi and Samuele Fraternali offered insights into the overall industry’s performance in 2017 but also the average Italian online gambler, who was found to be male, living in the Center-South regions and aged between 24 and 44 years.

There were 3.7m registered online gamblers at the end of 2017, and they held a combined 8.2m online gambling accounts. First-time registrants were up 30% to 698k.

Sports betting was the most popular vertical, with 1.67m (+26%) Italians making at least one online wager last year. Online casino players were up 17% to 880k, while poker tournament players rose 9% to 611k and cash games improved 6% to 447k. Bingo numbers were flat at 280k.

Online gamblers are still overwhelmingly male (82%), although the female share nudged up one point from 2016.

The Campania region in the country’s south is the third-most populous yet it had the highest number of active players in all verticals, accounting for 19% of all sports betting actives, 16% for poker tournaments and 18% for poker cash games. Campania tied for 17% of active casino players with Sicily, which ranked second in actives in all the other verticals.

However, while the central-south regions are the most active, the northern regions are the big spenders. When it comes to individual player spending, the Liguria region earns top marks with €147, followed by Trentino Alto Adige at €135 and Abruzzo at €131. Campania brought up the rear with €104, behind Sicily’s €112.