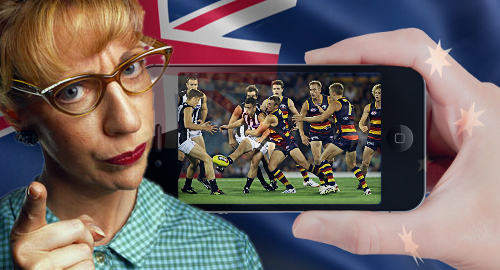 Australian bookmakers will soon be reduced to advertising by semaphore flags if current trends continue.

On March 30, the Australian government imposed a ban on gambling companies advertising during live sports broadcasts between 5am and 8:30pm on commercial free-to-air television, radio and pay-TV. The restrictions commence five minutes before a sports event kicks off and extend to five minutes after the event’s conclusion.

The new restrictions were prompted by concerns that Aussie youths were being over-exposed to gambling ads. But it’s since dawned on the nation’s nanny-staters that ‘kids’ increasingly don’t watch TV or listen to the radio. They now consume much of their sports entertainment on their phones via online streaming services.

As a result, the Australian Communications and Media Authority (ACMA) announced Thursday that it is consulting on new rules to extend the new restrictions on gambling promos to also apply to live-streamed sports events. The ACMA has invited stakeholders to submit their views on the streaming proposal no later than May 10.

The ACMA proposes applying the new streaming restrictions to a broad range of online content services, including content aggregators/curators/syndicators, social networks, sports organizations and associations and, of course, wagering providers.

The new TV rules also include a blanket ban on promoting betting odds during the sports event, or promoting odds by commentators and guests from 30 minutes before play starts until 30 minutes after play concludes. Gambling organization reps also can’t appear at, or appear to be at or near the sports venue at which an event is taking place.

Aussie bookmakers, broadcasters and sports organizations objected to the new radio and television rules, but their pleas fell on deaf ears. The ACMA is currently monitoring the impact of the broadcast rules and will decide after 12 months whether to conduct a formal review of their effectiveness.