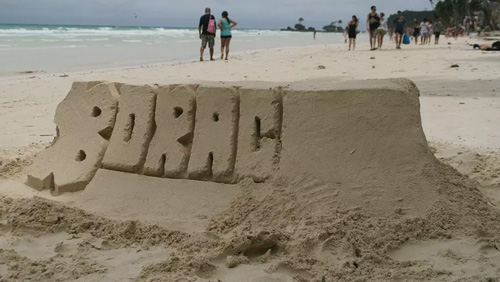 Reuters reported that the Philippine government has shelved the $500 million integrated resorts project of GEG in Boracay amid the growing uproar of the public.

Presidential spokesman Harry Roque pointed out that GEG cannot proceed with the construction of the integrated resort in Boracay even if it already won a provisional license for the project. GEG still has to secure the nod of Duterte before it starts implementing the casino plan, according to Roque.

“There will be no new casino in Boracay,” Presidential spokesman Harry Roque said in a news conference.

Local reporters, however, claimed that Roque failed to elaborate whether the ban will take effect during Duterte’s term or only during the 6-month closure.

Coincidentally, the Philippine government made the decision just a day after a senator and a member of the Philippine House of Representatives have filed twin resolutions seeking to investigate the six-month closure of Boracay as well as the approval of casino construction on the island.

On Tuesday, Senator Antonio Trillanes IV, a staunch critic of Duterte, filed a resolution seeking to investigate the Philippine president’s order to shut down Boracay, claiming that the directive was made to facilitate the start of the construction of GEG’s $500 million integrated resort on the island.

Trillanes also called out Duterte on his alleged bluff that Boracay island will be converted into an agricultural zone under the country’s land reform program, saying that farming isn’t suitable in the country’s major tourist destination.

“I maintain my position that the reason why Boracay was ordered closed is for the planned construction where they need the ports to bring in construction materials and heavy equipment,” Trillanes said in a press conference yesterday.

Echoing the sentiments of Trillanes, Bayan Muna Partylist Rep. Carlos Isagani Zarate found it “ironic and intriguing” that the government allowed the entry of GEG to the island despite Duterte’s closure order.

Zarate filed a separate resolution also seeking an investigation and called on his colleagues to take up the issue in order “to prevent any more damage to Boracay and to the people relying on the commerce of the island.”

He claimed that GEG’s entry in Boracay is “projected to add more burden to the island and its people and environment.”

In March, the Philippine Amusement and Gaming Corporation (PAGCOR) approved the construction of GEG’s integrated resort on Boracay after granting the group a provisional gaming license. GEG announced that it planned to start the construction of its multi-million dollar casino resort by 2019 and expected to be completed in three years’ time.

Meanwhile, PAGCOR has repeatedly defended its decision to grant the provisional license to GEG and its partner Leisure Resorts and World Corp, through their subsidiary Boracay Philippines Resort and Leisure Corporation (BPRLC).

In a statement, PAGCOR insisted that it ensured that the licensees comply with pertinent laws, rules, regulations and ordinances promulgated by authorities relative to the establishment and operation of casinos.

“The provisional gaming license granted to BPRLC was issued after it met all initial documentary requirements, including a Certificate of No Objection and a minimum investment commitment of not less than USD300 million,” PAGCOR told CalvinAyre.com in an e-mailed statement.

However, PAGCOR noted that the casino operator has yet to submit a proof of ownership or lease of the land on which the casino resort will be built, a detailed Project Implementation and Development Plan, an escrow account, performance assurance, surety bond, financial statement, documentary requirements, among other documents.