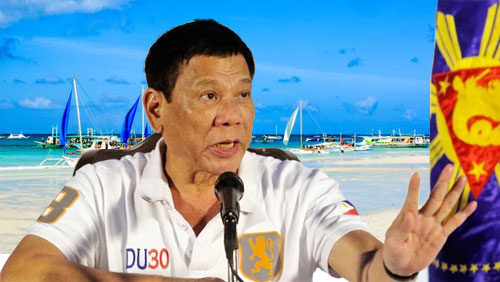 Casino operators had approached Boracay Island with a slot machine in one hand and a deck of cards in the other, ready to launch casino operations in the tourist hotspot. Philippine President Rodrigo Duterte left them there on the hot sand in their beach garb and sandals, and told them there was no way casinos would find a home on the island. Now, he has announced intentions to turn the land over to farmers to make it an agricultural center.

The Philippine president has declared Boracay Island to be a land reform area following a six-month rehabilitation of the land. In a press conference Monday afternoon, the leader stated, “You want to know now, I’m going to make the announcement. It’s going to be a land reform area for the Filipinos.” Once the six months have passed, the land will be turned over to farmers.

In the past, Duterte has referred to the area as a “cesspool” overrun by tourists. He is now following the advice of the Department of Environment and Natural Resources, the Department of Tourism and the Department of Interior and Local Government. All three organizations have suggested that the area be closed for six months beginning April 26.

In the words of Duterte, “pag mag-clean, sarado,” roughly translated as when it’s (the island) being cleaned, it’s closed. He indicated that the land would serve better as agricultural grounds and has even suggested providing farming equipment to the locals in the area.

Duterte doesn’t put casinos high on the priority list in the country. He had earlier rejected plans by Galaxy Entertainment Group to build a $500-million integrated resort on Boracay, asking the group, “Why would I give you a casino there?  What will the Filipinos get out of it?”

According to Duterte, the island is, by law, forest and agricultural land. The island sits about 170 miles south of Manila and has approximately 17,000 residents, most of whom are in the tourism industry. In 2017, around 1.7 million tourists visited the island. It has come under fire recently for gross negligence and mismanagement, with multiple accusations of waste water being discharged directly into the ocean. Out of 834 sewage facilities on the island, only 118 were found to have permits in a recent survey.