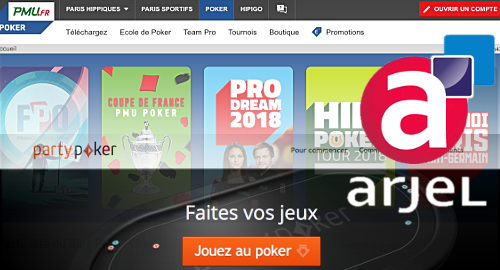 On Friday, French regulator ARJEL published notices indicating that two of its online gambling licensees, B.E.S. SAS and Pari-Mutuel Urbain (PMU), had been granted authorization to share online poker liquidity with the three other European Union member states that have agreed to share their regulated market’s online poker players.

PMU is a French racing and sports betting operator, but it also operates its own online poker site via the Poker.pmu.fr domain. B.E.S. SAS is the local subsidiary of Bwin, the marquee sports betting brand of UK-listed operator GVC Holdings, which also controls the PartyPoker online poker brand. GVC previewed its cross-border liquidity plans in February.

While PMU has yet to establish a Spanish poker license, GVC operates both the Bwin and PartyPoker brands in Spain’s regulated online gambling market. Spain is one of the other three countries, along with Italy and Portugal, that joined France in the four-way online poker liquidity deal signed last summer.

The Stars Group’s flagship PokerStars brand was first out of the gate to launch cross-border liquidity between its French- and Spanish-licensed sites. PokerStars, which is Portugal’s only licensed online poker operator, has also vowed to extend its EU pool to Portugal sometime in the current quarter.

It’s anyone’s guess when Italy will start issuing its own poker liquidity authorizations. Some Italian politicians and local gaming firms continue to argue against the whole concept but Italy’s Undersecretary to the Ministry of the Economy assured the public in January that the country would honor the pact it signed.