Home / Poker / 888Poker partner with One Drop; Dominik Nitsche to appear in the Big One 888Poker will partner with the One Drop Foundation creating the first-ever online poker tournament with benefits heading towards the non-profit’s coffers, and Dominik Nitsche will appear in the $1m buy-in Big One for One Drop.

I pay £950 a month to live in a tin pot shed. The kitchen is in the living room. When the old-plastered oil of dead fish lights and burns, we open the windows and cower under the big purple sea of blankets.

The dishwasher is me.

It’s an artform I perfected when I was 18, in a part-time job in a pub with a ghost called Mildred.

But it’s such a small place.

I fill a white bowl with warm water (the type that I used to puke in during my 24-hr hangovers). I fill the sink with the same, only this time I squirt eco-friendly washing up liquid into the foam (the type of fluid that doesn’t produce bubbles).

Now hands that do dishes can feel soft as your face, with mild green Fairy Liquid.

Fairy Liquid made my hands look like the old lady’s who built a house out of cake so she could eat kids.

If you see how many dishes I have to wash you would think I have fed a tribe. It’s insane, as is the amount of water I use. And I never give it a second thought. The tap never runs dry. I turn it on, and water comes out. And I only dare to drink bottled water because I am afraid of bugs.

2.1 billion people don’t have that option.

2.1 billion live without water at home.

I know that because 888Poker told me so.

Unlike me, they’re doing something about it. 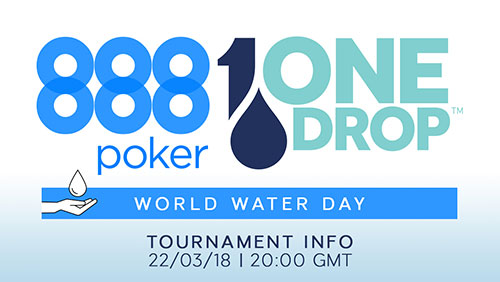 Cirque du Soleil founder, and keen poker player, Guy Laliberté created the One Drop Foundation in 2007 as a way to provide clean, sanitised water to those 2.1 billion people. In 2012, the non-profit partnered with the World Series of Poker (WSOP) to create the first-ever $1m buy-in event – the Big One For One Drop.

Since Antonio Esfandiari won the inaugural One Drop for $18m the pairing of the WSOP and One Drop has created the Little One for One Drop and the One Drop High Roller. Events have been held both in Las Vegas and in Europe. 888Poker has had a close working relationship with the WSOP for many years now, and so this hook up makes sense.

Between us the One Drop Foundation and the poker community has raised $20m since 2012, positively affecting the lives of 170,000 people.

The move places 888Poker right up there when it comes to poker organisations focusing on charitable fundraising.

During my visit to the Effective Altruism Global Summit in San Francisco, EA founder, William MacAskill, talked about the importance of putting your charitable earnings into buckets if you have an inner conflict on how to donate.

It’s nice to see that 888Poker have a bucket for the heart and one for the rational and logical thinking brain.

888Poker hired Raising for Effective Giving (REG) Ambassador, Martin Jacobson, and partnered with the EA organisation throughout their XL Online Series to send funds into that rational bucket. They now have the heart covered with the One Drop partnership.

The former One Drop High Roller winner, and current 888Poker Ambassador, Dominik Nitsche, will compete in the $1m Big One for One Drop when the event closes down the WSOP in the Summer.