Sportech shares lose half their value after failing to find buyer 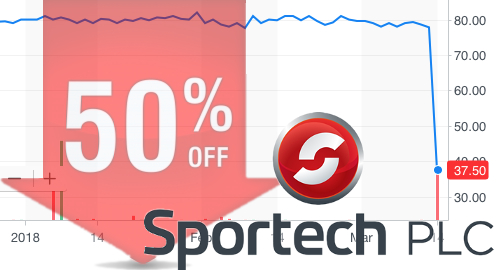 UK betting operator Sportech saw its shares lose over half their value on Wednesday after announcing that nobody wanted to buy the company.

Wednesday morning saw the UK-listed Sportech inform the markets that the formal sale process (FSP) it commenced last October as part of a wider strategic review had failed to deliver the intended result.

While Sportech said it had engaged in “detailed discussions” with an unspecified number of interested parties, Sportech’s board ultimately concluded that these talks “were unlikely to result in an offer” that the board could in good conscience recommend to shareholders. As such, Sportech has closed the FSP and terminated further discussions.

The market reaction was swift and negative. After closing Tuesday’s trading at 77.8p, the stock opened Wednesday’s trading at 31.5p, before staging a minor rally to close out the day at 37.5p, down 51.8% from the day before.

Investors weren’t just spooked by the lack of suitors interested in acquiring Sportech’s business, but also by the state of that business. In a trading update, Sportech announced that the first 10 weeks of its financial year had been “fairly challenging,” thanks in part to a series of winter storms keeping people away from its Venues business in Connecticut.

Furthermore, the company warned that its 2017 earnings would come in “below expectations” at around £6.5m due in part to “write-downs of old stocks and doubtful debtors,” but also from a series of exceptional items, all but one of them broadly negative.

These include £4.3m in charges due to the departure of some senior managers and board members (including former CEO Ian Penrose and CFO Mickey Kalifa); £2.5m in restructuring costs associated with the strategic review; and a book loss of £1.6m on the sale of its shares in NYX Gaming Group. On the plus side, the company says it will collect an additional £1.4m from its never-ending Spot The Ball tax dispute with the UK government.

Despite the doom and gloom, Sportech insists it sees no reason to alter its expectations for the current year. It inked a flurry of deals already this month, including a new web and mobile betting platform deal with Pennsylvania’s Parx Racing, and a new long-term contract with the Camarero Racetrack in Puerto Rico.

In other positive news, the company finally appointed a new CEO. Andrew Gaughan, an eight-year Sportech vet, has been elevated to the corner office, while the company says it’s still looking for the right person to fill the CFO vacancy. Sportech will release its final 2017 earnings report on April 24.