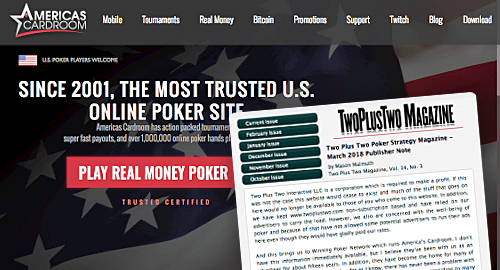 Last month, high-profile poker player Joey Ingram went public with suspicions of strange goings-on at ACR, including the widespread use of bots, multi-accounting, collusion and the possible existence of ‘superusers.’

A few weeks later, Ingram made public his conversations with WPN CEO Phil Nagy that indicated Ingram’s allegations had some merit, but Ingram declared that he had “limited faith” in WPN’s capacity to remedy the situation.

This week, Two Plus Two Interactive LLC boss Mason Malmuth issued a statement saying that he’d emailed Nagy on February 24 that addressed four issues: “late tournament registration (which we now understand has been addressed), bots, possible super users, and other possible collusion.” Malmuth also offered suggestions on how some of these issues might be addressed.

But Malmuth apparently never received a response from Nagy, and thus the poker forum has decided that it “will not accept any more advertising from Winning Poker Network and their sub-forum will be closed.” Malmuth left open the possibility that this banishment to forum purgatory could be lifted if Two Plus Two received a “positive response” from WPN.

Malmuth emphasized that TwoPlusTwo was in the business of making money and that WPN had been a valued advertising client for around 15 years. But given the complaints of TwoPlusTwo users and Malmuth’s concern for “the well-being of poker,” WPN will stay in the penalty box until “solutions” to the network’s alleged problems are found.