The art of poker v the art of the man: can we separate the two?

Doyle Brunson gets his gun holsters in a twist after another controversial Twitter debate, prompting Lee Davy to prod the question of separating the art of poker from the art of the man. 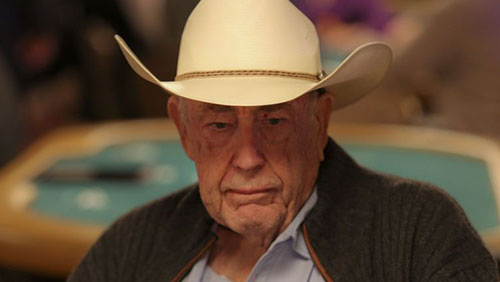 I took my Dad out for dinner. The first time in 43-years I can remember us being alone for more than 20-minutes, other than a trip to Coventry in a lorry when I was too young to remember, what, why or where.

The conversation somehow got onto the subject of the number of prisoners filling up the jail cells throughout the world, and the need to do something to reduce the statistic.

“We should bring back the death penalty.” Said, my Dad. “If people knew they would die if they murdered someone, there would be fewer murders. Prison life is a doddle; they even give them a trade.”

It was one of those moments where sharing your opinion would be as pointless as a worm crawling onto a baking hot Californian pavement to escape the inevitable drowning beneath the sprinklers.

I nodded my head, happy the only topic of conversation was the death penalty and not 100 reasons why foreigners should leave the UK shores (except my American wife because she is somehow different to the rest).

I put it down to old age.

It’s the same with Doyle Brunson.

When the world changes as quickly as it does, a public figure like Texas Dolly is always going to feel like someone has repeatedly punched him in the face when he decides to share his old school views on feminism, and this week, gun control.

The President of the USA believes the solution to school massacres is to train and arm the teachers – leading people like Brunson to support the hire of ex-veterans to protect the children. The idea is as witless as the man who suggested it. Sure, use it as a reductive measure while you roll out new legislation banning the personal use of firearms, but as a long term fix?

The cognitive dissonance around this issue is deafening.

I must have the highest rate of being wrong on twitter. Anytime I say ANYTHING someone sends me actual articles saying the opposite. Guess that means I should shut the fk up. https://t.co/41pv1nyY2z

Should Doyle Shut The Fuck Up?

A friend recently told me that Ezra Pound is the greatest poet ever. Someone else chimed in to advise those who hadn’t read the Wiki page of Pound, that he was a supporter of Benito Mussolini and Adolf Hitler. American forces arrested him in Italy on charges of treason, after he spent large parts of WWII making radio broadcasts criticising the US (paid to do so by the Italian government).

The reply from the Pound fan:

“A lot of the admiration for him is tinged with ambivalence at his proclivities, but nobody can doubt the brilliance of the work. If that tempers admiration of it or puts you off, fair enough. For me, if we brought to bear a creator’s foibles on the work, we’d read nothing. I think you have to separate the two.”

His challenger didn’t agree, unable to separate Pound’s creative achievements from his moral failures.
If we put Brunson in the role of Pound, and replace poetry with poker (and I’m not calling Brunson a fascist), then you have a similar problem. On the one hand there is the Godfather of Poker. A man much loved by the poker community (Super System, WSOP history, still competing and winning at a ripe old age). On the other, you have someone who makes a significant number of his 431,000 followers slightly perturbed when they hear his stance on guns, choice of President or his views on the #MeToo campaign.

I’ll give him his due, Brunson isn’t shy. He has an opinion, and he will air that opinion (his most recent suggesting that Utah has had zero school shootings because the teachers carry guns until someone reminded him that Utah has high rates of accidental shootings involving kids). But he did take a Twitter sabbatical recently (albeit for two-days) when the criticism of his #MeToo comments became unbearable. And you can feel his angst at some of the replies that fly in his face wishing him a terrible death, disease or eternal missed flush draws at the river.

Can you separate the poker from the man?

I’m not sure you can.

There was a time when the closest you came to witnessing the real Doyle Brunson was reading an interview in Cardplayer magazine. His thoughts on feminism, school massacres and religion, no doubt missing from the Q&A.

More poker players are choosing to take off their mask, revealing their true identity on social media, and with that, the fans have a choice to make. And it’s a difficult one.

I love my Dad because he’s my Dad. There is a softness in my heart as I see him mellow with the question of his mortality on the horizon. Our history creates that bond. But if I were to listen to him share views that run so counter to my own, dinner after dinner, that love would surely die.

It’s the same with my icons.

Continue to be authentic, and to air your views.

It’s just not for me.

I can’t hold separate opinions on the man, and what has made the man a legend.