Jake Cody returns to the Internet screens after a prolonged period of absence showing how difficult it is for this art to continue during some of the toughest periods of your life. 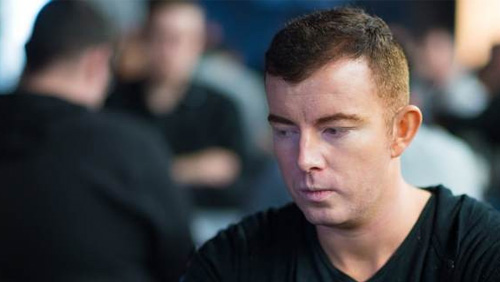 Masks. We adopted them in our teenage years. Resignation. We had two choices. Do what we feel naturally inclined to do, and face ostracisation from the tribe. Or do what society wants us to do, and feel a part of something, anything.

Most people wear a mask.

Poker players are a little different.

Most of them wear a mask. But there is an incessant need to scratch a bothersome ‘something’ underneath. The itch is a reminder that there is a mask. Dissonance remains within arm’s reach. Poker acts as a magnet pulling you back to your pre-resignation days.

But when you sit down and play, a different type of mask comes out of the drawer. Your job is to sell the lie, and it produces a schizophrenic type behaviour. Am I talking to the poker player or the person?

Jake Cody is someone who wears a mask when I speak to him. Had I been 20-years younger, and not someone who is likely to write about your personal life, I believe we could have become best buds. I sense a depth to him that I would feel comfortable bathing in. I am not sure the feeling is mutual. There is always this terrified, “What is he going to ask me next?” look on his face when we meet, and our last interview at the PokerStars Caribbean Adventure (PCA) was no different.

Sometimes I ask questions I know the answers to because I need to hear it from the source. I wrote an article calling Cody the potential Jason Somerville of blogging. Then, after a decent stint in front of the camera, he became as silent as a waterfall minus the water. It was evident he was going through a breakup, and being the father of two children living on two continents, I know how hard that must be.

I didn’t ask him directly.

I gave him the chance to tell me.

My assumption turned into reality when I saw him win the High Roller at the partypoker LIVE UK Poker Championship, walk over to the roulette table, and put the £42,670 first prize on black.

At that moment, I knew that he was a single man.

I will always remember reading the Tony Robbins classic, Awaken The Giant Within. At the beginning of the book, Robbins talks about flying in a helicopter to an event, seeing a long line of people below, thinking what the fuck are they doing and then realising they were all there to see him.

These stories don’t inspire me.

I want to know ‘how’ someone made it, and I don’t want to read about the magic milestone moments. As Gary Vaynerchuk puts it, ‘it’s all about the process,’ and nobody does a good enough job of explaining the emotion of the process.

I believe learning how people handle conflict, failure and adversity on an emotional level is far more instructive than learning about the intellectual process. But nobody writes about this well enough. It’s the wrong forum. Video blogs are the right forum.

In the same week, that Doug Polk failed to win an American Poker Award (APA) and ate humble pie in a candid video on how that decision hurt him, Cody gets back to business by creating a new video blog explaining his radio silence in 2017.

“It’s sad. Last year I had a lot of good memories, but I look back at it as a shitty year,” said Cody. “I was going through a big break up. It was a nightmare, to be honest. Very messy for logistical reasons, we bought a house together, we have a daughter together. It was very hard for everyone, but I didn’t want to be in an unhappy relationship 15-years later just because we have a daughter together.”


It’s crazy that Cody’s business has become our business. I can’t think of a person who would feel more awkward in this spot. Several times throughout the video, Cody apologises to his viewers for not keeping them in the loop about his need to stop vlogging.

As difficult as it must have been for Cody, he should have continued posting videos during his heartache. Poker is life. Life is poker. If you’re going to create an award-winning vlog, then you have to show yourself at your most vulnerable moments. There is more learning in those moments than any instructional breakdown of 87s v AK.

I am also hyper-aware that as someone who struggled to be a professional poker player because of marriage, and who had ‘plays too much poker’ written on his divorce papers (a divorce that involved a ten-year-old child), I am intensely interested in how Cody deals with his situation. Given that over 50% of marriages end in divorce coupled with the unusual career of pro poker player I am sure I won’t be alone.

Cody stated in his Vlog that he couldn’t muster a false happy go lucky attitude. I wouldn’t have wanted him too. I like the tears, the dark stuff. I like life. Dark love is as much a part of love as all the shiny happy stuff.

But this is Cody’s life.

It’s up to him what he shares with the world.

And this is where choosing to vlog becomes a questionable choice of hobby. To be successful, you have to post consistent content. Otherwise, people go elsewhere. You don’t have to focus on your personal life. Pewdie Pie and the other multi-millionaire content creators show that you can set boundaries. But Cody’s videos are about poker and life, not exclusively poker. It’s a Big Brother lifestyle show. Divorces are a part of life, and people will want to know what’s going on, not because they are sick sadists, but because Cody is playing the role of Truman and we tune in to watch the Truman Show.

The next decade is going to be difficult for Cody. Living apart from your child is a lonely experience. The guilt and shame eat you alive. The pain and suffering that comes with consent orders, financial orders and watching each other falling in love again creates havoc with your psyche. You never feel good enough as a father, a husband – a man.

So Cody has a choice.

Creating videos about putting £42k on black are easy. Sitting down in front of the camera, explaining how you feel is something else entirely. Cody’s fans deserve to know what direction he plans to take next, so they can tune in or tune out.

Stars shine brightly. They attract attention. They make you stop and stare. Cody is smart enough to win more money playing cash games in Macau than he will playing tournaments. And yet he chooses the latter because deep down, this introverted lad from Rochdale likes the fame.

A can see that mask slipping, Jake.

The next time I see you, I’m going to try and peel it off.