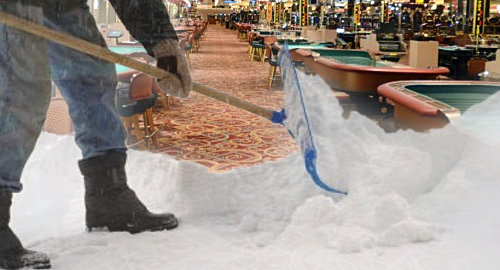 Atlantic City casinos started 2018 off on the wrong foot, as no one wanted to brave the snow to play slots or table games in January.

The poor showing would have been much worse were it not for the operators’ online gambling sites, which brought in a record $22m in January, which nudged up the market’s overall gaming revenue year-on-year decline to a slightly less dire 9.9%.

The decline wasn’t the fault of any one vertical, as slots revenue fell 11.4% to $109.5m while table games were down 15.1% to $52.8m. The downturn also wasn’t simply the case of gamblers playing lucky, as all seven operators reported significant declines in both slots handle and table drop.

All seven casinos were in negative brick-and-mortar revenue territory for the month, with four operators suffering double-digit declines. The market-leading Borgata was down 11.4% to $53.6m while runner-up Harrah’s fell 16.3% to $23.5m. The Tropicana experienced the month’s smallest decline, falling 5.7% to $22.9m, while Caesars suffered the biggest percentage drop, tumbling 23% to $21.7m.

Even factoring in the online gambling numbers, only the Golden Nugget managed to stray into positive ground, and even then, its combined gaming revenue increase was a mere 1.7%.

New Jersey Casino Control Commission chairman James Plousis blamed January’s poor showing on a blizzard that hit the region on January 4, telling the Associated Press that “when people are stuck in their homes by more than a foot of snow and temperatures are dipping into single digits, they don’t come to Atlantic City.”

The Tropicana apparently agreed, as that might explain the cause of the fire that broke out on the 44th floor of the casino’s west tower on Wednesday. The fire was quickly extinguished, thereby spoiling the Trop’s potential as advertising itself as the hottest place in town. Sorry… Too soon?