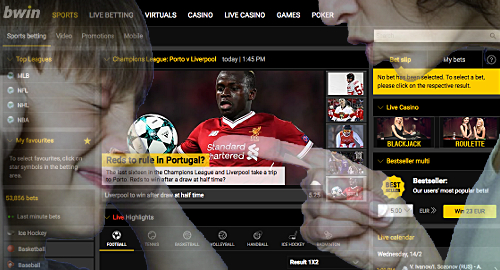 On Wednesday, the UK Gambling Commission (UKGC) announced that it had slapped GVC subsidiary ElectraWorks with a £350k penalty for “repeatedly misleading consumers with adverts relating to free bonuses.”

The ads in question first appeared on GVC’s flagship sports betting site Bwin.com, and were the subject of a public scolding by the UK Advertising Standards Authority (ASA) in August 2016. However, a similar ad appeared one week later on Bwin.com, and six similar breaches were discovered last April on GVC sites including PartyPoker.com, PartyCasino.com and Casinolasvegas.com, and then again on Casinolasvegas last August.

The UK has been clamping down on gambling operators’ bonus offers, part of the UKGC’s new strategy of ensuring a “fairer” gambling market by compelling operators to put consumers first, or else. Wednesday also brought word of tough new advertising standards for gambling operators.

The UKGC also issued a warning to GVC over its failure to ensure an individual who occupied a management position for marketing and advertising held the requisite personal management license (PML) during the period covering June 30, 2016 and April 10, 2017.

GVC apparently commenced the individual’s PML application in September 2016 but the UKGC didn’t receive the formal application until the following February. The UKGC acknowledged that GVC “experienced some technical difficulties” in submitting the application but nonetheless expected licensees to “plan ahead” to ensure personnel changes don’t result in breaches of their licensing conditions.

The UKGC is keeping the warning on file and will take it into account if the UKGC identifies further regulatory failures on GVC’s part.

GVC GAVE AWAY TURKISH-FACING BUSINESS
GVC was also in Wednesday’s headlines for the revelation that it chose to give away its Turkish-facing subsidiary rather than complicate GVC’s pending takeover of UK rival Ladbrokes Coral Group.

In November, GVC announced that it had sold its Turkish-facing subsidiary Headlong Ltd to Ropso Malta Ltd, which provided IT services to Headlong. Turkey considers online gambling illegal, and GVC’s reliance on Turkey for a quarter of its earnings was deemed a potential regulatory hurdle that could interfere with its Ladbrokes Coral deal.

The Turkish sale required Ropso to pay GVC a monthly sum for five years, with a maximum total payout of €150m. Late last week, GVC published its prospectus for the Lads Coral deal, which revealed that GVC had opted to waive payment for the Headlong sale, necessitating a €46m loss on GVC’s books.

A GVC spokesperson told Reuters that the ‘clean-break notice’ was necessary because the original five-year plan “was going to take too long … and Ladbrokes and GVC had agreed there wouldn’t be a recommended merger” if the Turkish liability was still hanging over GVC’s head.

The bankers who are helping GVC finance its Lads Coral takeover also reportedly took issue with the Turkish deal. Deutsche Bank and Nomura reportedly required GVC not to service any of its debt with “cash received directly” via the Turkish sale.