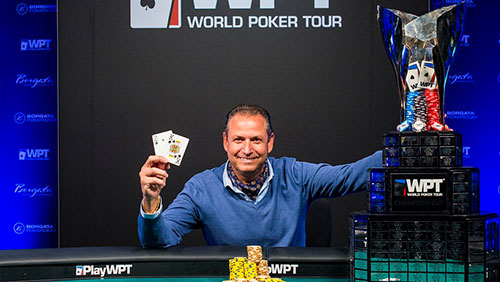 3 Barrels of World Poker Tour wood including a planned trip to New Zealand, the second title for Eric Afriat, and a tidy sum raised by the WPT Foundation. Barack Obama is heading to New Zealand. The former US President is best buddies with former Prime Minister, John Key, who currently sits on the Air New Zealand board, so one imagines a free flight is part of the deal.

Pay attention to the dates.

If you get them wrong, you could end up taking the signature of the wrong guy.

His long lost twin, World Poker Tour (WPT) President, Adam Pliska, is getting there May 25.

Yes, ladies and gentlemen, the best poker TV show in the world is heading to New Zealand. WPT host, Lynn Gilmartin, let the Mauri out of the bag in a video recorded for Facebook.

Sky City Auckland act as hosts May 25 – June 4 with the pièce de résistance being an NZD 2,200 buy-in Main Event running June 1-4. Snow is on the deck at that time of year so take your skis.

WPT New Zealand falls under the guise of the WPTDeepStacks livery.

The plaque on the WPT Championship trophy with the name Eric Afriat etched into it now has two diamonds punched into silver thanks to his second tour win.

Afriat was the only Canadian on a final table filled with Americans, three of which are very experienced when it comes to the back end of a WPT Main Event.

Zach Gruneberg finished second to Jesse Sylvia in the Season XV WPT Borgata Poker Open. Gruneberg made it to #3 in this one. Sylvia is a form

er World Series of Poker (WSOP) Main Event November Niner, and a man who has won that event, Joe McKeehen, once came fourth in the Season XIV Borgata Winter Poker Open. It was a case of Déjà vu this time around.

But none of them had the rich experience of Afriat. The Canadian was making his fifth WPT Main Event final table appearance, and now he has his second title. Afriat won the $3,500 No-Limit Hold’em Championship at the Season XII WPT Seminole Hard Rock Showdown for a million bucks. There were 1,795 players in that event. He overcame 1,244 entrants in this one, including Justin Zaki, who began the heads-up encounter with a 98 v 52bb chip lead.

Afriat has now won more than $2.5m in live earnings.

You can expect the $3m Guarantee to be raised next time after more than $3.9m entered the coffers this time around.

The Americans sure love their live tournament poker.

Other stars with a fatal attraction to poker who went deep in this thing were David Paredes (15th), Kevin Saul (16th) and Jonathan Little (23rd).

Jonathan Little was also present at the WPT’s Superbowl charity event NVRFLD. Going into the event, the WPT Foundation had raised more than $8m for charity since its 2012 birth. You can add another $1.2m to that.

According to Anna Khait’s Twitter feed that’s the amount the WPT raised for the likes of MATTER, Healing Haiti and the Starkey Hearing Foundation.

The former Survivor star finished second in the event after her heads-up opponent Jon Aguiar flopped a flush holding A7s versus her T6.