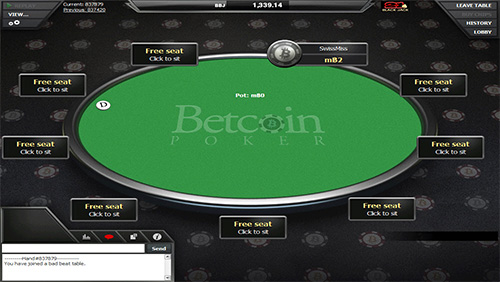 Betcoin Poker, the cryptocurrency online poker room that closed on Christmas Day, reopens in a bid to distribute the funds remaining in the Bad Beat Jackpot.

I wolf-whistled at her.

She looked adorable in her pretty dress looking like the scent of the sweetest perfume; bow in her hair, shoes that sparkled like the stars seen from a bed underneath an Icelandic sky.

It was a natural reaction.

I’m sure she doesn’t care, but I do. I don’t want her to grow up believing that it’s ok for men to whistle at her when she looks pretty because daddy did. I made a mistake. And as with all errors, the important thing is what to do next.

Betcoin made a mistake.

One of the oldest cryptocurrency gambling sites in the business, it announced to its customer, plans to close the poker room on Christmas Day. Players didn’t greet the news with a silent revel. There was a mini-uproar in Betcoin Poker circles. It seems that Betcoin’s new owners, protected by the secret cloak of blockchain technology, believed that once you chopped the business up not, all the particles would survive independently.

The poker room was not a money spinner.

It would have to die.

To say that the Betcoin Poker room had a few branding issues is an understatement. Poker forum users were forever pressing a never waning light into the face of their failures. One of which was the poor handling of the Bad Beat Jackpot (BBJ).

After the closure announcement, Betcoin officials posted a notice on the website advising former players that they would divide the BBJ between the players who had previously invested money into the sizeable quota.

Then, a little later, Betcoin hammered a new notice onto their front door after realising that it was impossible to return the money to the players with 100% accuracy and transparency, and as this was in violation of blockchain morals, there was only one solution – they would reopen the poker room.

The rules state that you need to lose a hand containing four jacks or higher to win the BBJ. 70% of the money will go to the loser of the hand, 20% to the winner and 10% to the rest of the table.

Betcoin will relax the requirements to win the hand, therefore making it easier to win the jackpot so they can distribute the money accurately and transparently.

They made a mistake.

They are dealing with it.

But with all mistakes comes the inevitable mud slingers.

Those who have contributed towards the BBJ were expecting their slice of the pie. Now it’s not coming they are angry.

And what happens when someone cracks the BBJ?

One assumes the poker room will once again close.

After all, not many people wolf whistled at her when she was open for business.