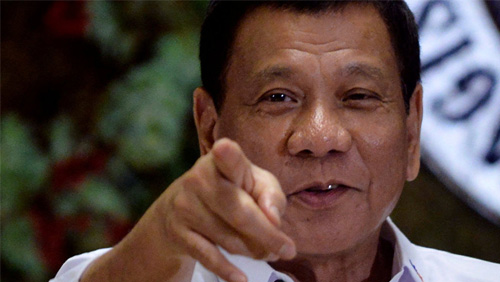 Philippine President Rodrigo Duterte has admitted he asked the help of notorious gambling financier Atong Ang to stamp out illegal gambling in the country and shore up the revenue of the flailing state-run Philippine Charity Sweepstakes Office (PCSO).

In an impromptu speech before leaving for India, the president confirmed that he had talked to Ang, who he described as a “number one gambler,” according to SunStar Manila.

Duterte didn’t mention when the phone call took place but he admitted admonishing Ang for his supposed illicit activities before appealing to his “friend” to help the PCSO eradicate jueteng, a popular illegal numbers game.

“I called him. I told him, ‘Atong, you are the number one gambler here in Davao. You operated all (the gambling facilities here). Let’s not fool each other. You go to the PCSO, stop all your illegal activities, and help the government,'” Duterte said, according to the news outlet.

At the Senate inquiry, Philippine Senator Panfilo Lacson recommended the restructuring of the PCSO in order to stop jueteng in the country, Malaya.com reported.

Lacson claimed that charities supported by the state-run lottery lost PHP4 billion (US$76.68 million) due to corruption.

Ang, who was appointed as a gambling consultant, accused PCSO general manager Alexander Balutan and former PCSO chairman Jose Jorge Corpuz of under-declaring revenue generated by STLs, according to a Rappler report.

He suggested taking away the franchise licenses of AACs and letting the PCSO run the STLs.

Both Balutan and Corpuz denied the allegations, claiming Ang just wanted to ease them out of the state lottery to gain control over the STL. Balutan said Ang tried to bribe them with a monthly payment of PHP200 million ($3.93 million) in exchange for handing over nationwide control of STL.